'I’ve worked at a McDonald’s franchise for almost five years. I do everything in my store: cashier; kitchen; runner; drive-through. Wherever I’m needed, I’m there. (I make $10.50, just $2 over the Illinois minimum of $8.25.) I never want Manny (my son) to have to do this.' 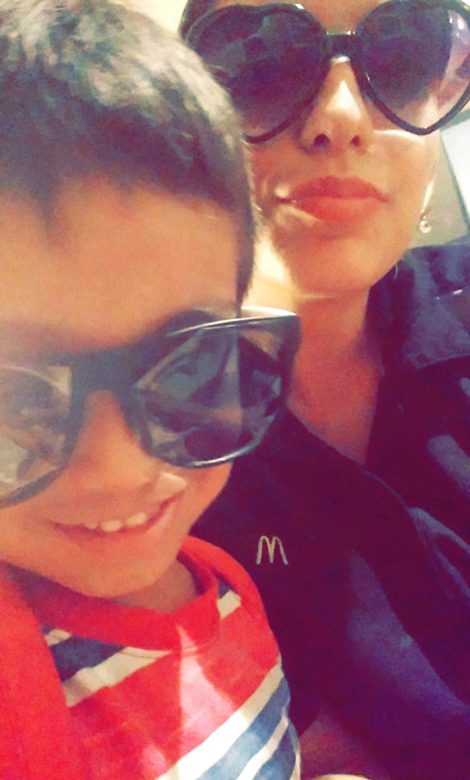 Job: I’ve worked at a McDonald’s franchise for almost five years. I do everything in my store: cashier; kitchen; runner; drive-through. Wherever I’m needed, I’m there. When I’m not at work, I’m with my son — and sometimes protesting for higher wages and a union in the Fight for $15 movement. (I make $10.50, just $2 over the Illinois minimum of $8.25.)

Childcare setup: Daycare center five days a week; two days with me (or his Grandma).

Childcare cost: Because of recent cuts to childcare assistance for Illinois low-wage workers like myself (thanks to our new Gov. Rauner), my copayment went up from $40 per month to $75 per week this year. My crap wages stayed at $10.50 an hour.

Parenting policy you want to see in the world: Having one of the parents stay at home to care for the kid(s) would be ideal. That’s how I was raised, and I loved it. But the economy is so bad right now that both parents have to work. Corporations like McDonald’s should have fair wages, set schedules, and paid sick or emergency days so we can have more time and resources to raise our children.

Alarm rings. Like always, I begin my morning dance with the snooze function on my cell phone. 5 more minutes? Getting up can be so hard, especially when Manny likes to take at least 20 minutes to say goodnight when we both try to go down at 9:00 p.m.— his small bed is next to mine in our apartment bedroom. But somehow in the morning, he sleeps through the alarm, kind of like I want to right now. I close my eyes for just a bit more sleep…

!!!!! I start at 7 a.m.! This is going to be close. Up! Daycare is right across the busy road from us — just a five-minute drive — and then another 10 minutes to work. I’m up, I’m slapping on my makeup, twisting my hair up into a McDonald’s-sanctioned bun — no stray hairs allowed — and calling back into the bedroom, “Manny, wake up baby!” On with my Dickie’s pants — can’t be too tight. Luckily, today, Manny cooperated and dressed himself. I usually have to dress him while he’s still sleeping, and somehow he still raises his butt up to put on the pants. I drop him off at his daycare, and race into the Home Depot lot to park — McDonald’s across the street doesn’t want us taking spaces for the customers — and I come in and clock in at 7 a.m. on the cash register.

I’m at my usual post at the drive-through window, by the time the teachers, construction workers, and people in suits come through for coffee.

12:30 p.m.
A typical day: the drive-through is packed, the kitchen runs out of shit, it’s just frustrating and your manager is yelling at you to hurry up, look at those times! From the moment you hit the first key on the register for an order, the computers start timing you — you have 10 to 15 seconds to take the order, 45 seconds to get the food out to the front counter — coffee, sandwich and hash browns ready. No more than 90 seconds in all, or the manager’s complaints start rolling in. I find it impossible.

It’s so stressful — especially when you have a manager looking at your time, barking “park your cars” (if the kitchen is dragging, we have to park them up and bring up the food, so they don’t stay at the window and you can hand out the next order). It’s like, get out of my face, I’m trying!

I never want Manny to have to do this.

Finally off work — nine-hour day today. I was off at 4 p.m. but we had a rush, cars backing up, and I couldn’t clock out until 4:15 p.m. I have to rush to the daycare before the 5 p.m. closing time. I get there and Manny runs up saying “Mommy!” I love it. He’s the reason I’m doing everything. The light at the end of the tunnel.

Get home and feed Manny — and boil up the star-shaped pasta he loves for soup. I cook for people all day, but this is the only one I really enjoy doing it for. Once every four months, when I need to vent and go out with my friends, Manny’s aunt will watch them. But other than that, it’s just me and him.

Right now he’s watching “Curious George.” When I go to shower I say mommy is going to take a shower, and I leave the door open if he needs something. We’re asleep by 9 p.m.

Manny wakes me up with a horrible cough. Mental note to make a doctor appointment. It’s usually not till the following week or so, so I’ll let my manager know I have a doctor’s appointment, or make it right at 4 p.m. so I can take him.

I toss and turn and keep hitting snooze. Today, unfortunately, is one where Manny isn’t going to cooperate and won’t get out of bed. I have to use the secret weapon —tell him he can wear his Spiderman t-shirt. Like clockwork, he gets up and we’re out the door.

Another busy day at work. I run off to pick up Manny. I feed him and while he plays, crashing his toys together, I wash the dishes. I wash the dishes by hand — half of my money goes to rent, and there’s no dishwasher. I get his clothes ready for the next day, laying them out so I can sleep more, expecting another tough morning ahead.

Manny is undressing himself because he wants to wear his Ninja Turtles pajamas, but decides that he doesn’t want to shower tonight. Once a month— if he didn’t get dirty or sweat — I’ll let him get away with that.

Manny is wide awake, out of his crib, and trying to climb into my bed. I have about another hour of sleep left, and I’d really like to get it. The only thing I can think of is, you’re not going to wake up when I need you to wake up!

I get up and notice Manny is fast asleep — just as I had predicted. Either way, we make it out the door in time. Thankfully, the daycare gives him breakfast. I’m posted up at the drive-through window by 7 a.m.

Finally out of work. I rush out so fast I forget to punch out — the store manager will go in and fix it for me. I pick up Manny and we head to the Mexican grocery store because the stuff there is cheaper. I have to watch every penny that I spend — instead of Tropicana, I get the store brand, cause it’s two dollars cheaper. Since Manny is lactose intolerant, I buy him special milk formula, which is way more expensive than regular milk — $5 for half a gallon, which he’ll drink in two days. That’s a half hour work for me.

I come home stressed and aggravated, my knee sore from standing all day, my neck hurting from looking up at the screen to see the next order all the time. I just want to lay down and sleep and forget about it all.

But I cook some spaghetti while Manny colors. This is my favorite part of the day — I can take my time, I’m not getting yelled at, and I can actually sit and enjoy it afterwards. I’ll put on the radio or a playlist on my phone.

As I wash dishes, Manny ends up inside his playpen. Clothes are ready for the next day, and it is now almost 8 p.m., which means shower and sleep. Manny in his playpen.

It was a smooth night. We both slept all the way through. The manager I actually like asked me to come in at 6:00 a.m. today, because they were a person short. I told her we’d have to make it 6:15 a.m. since daycare opens at 6:00 a.m.

2:00 p.m.
Start early, get off early! Instead of rushing to go pick up Manny, I go home and take a small nap. Guiltily — but it’s the first time I’ve had a moment to myself all week. Usually, without Manny, I don’t know what to do with myself. Should I get ahead on the cleaning? Start the cooking? Take a nap? Sit and watch a show? Nap it is.

3:30 p.m.
I pick up Manny. He eats a plate of rice with eggs, then a banana, followed by some strawberries. He asks to go outside with his bubbles, and I always go out and sit on the stairs with him. He would run into the street, or get bullied by some of the older kids out there.

I enjoy some fresh air as he draws on the sidewalk. Perfect weather. I check my phone, do some tweeting for Fight for $15, and check Facebook. Manny’s like, “Mommy look, mommy look!” I’ve gotten good at doing both. Manny asks for a sandwich. He already ate, so I’m surprised — yet not that surprised because he has always had such a huge appetite. We sit and watch “Ninja Turtles” for a little while and go to bed around 9:30 p.m.

Finally, a day off. It feels so good to sleep in for a bit. Manny climbs on top of me, all smiles. I take him to daycare. Since it is set up like a school, he goes there Monday through Friday.

9:00 a.m.
I’m eating breakfast and getting everything ready to go wash clothes. I drive to the laundromat two blocks from my house, since there’s not one in the building. About $10 in all — an hour’s work.

12:00 p.m.
I head to the mall with my friend who used to be on my softball team, and we now have sons one year apart. My cousin is getting married, and I find a dress that’s $7 on clearance at Windsor. It’s always clearance for me — for Manny, it’s whatever he needs.

I get ready to pick up Manny, feed him, and have a play date. My same friend comes over with her son and they both draw outside with chalk.

Play date is over and Manny wants a bologna and cheese sandwich. I feed him again, and then give him a shower. Off to bed we go around 9 or 9:30 p.m.

I have to work tomorrow, and the blues are setting in. It’s worse to know you have to work Saturdays, because everyone else is off, and I otherwise could stay in bed till 10 or 11 a.m. Manny will go over to his dad’s mom’s who babysits him — they both enjoy it. For me, I’ll be back at the drive-through window.

Medium is convening a conversation about work, parenthood, and how the two mesh or don’t in our lives. To get involved, please follow the Working Parents publication and the tag, and help us expand the dialogue by writing a post or a response.

Adriana Alvarez is a single mother of beautiful 3-year-old boy, Manny. She is a McDonald’s worker and leader in the #FightFor15. Follow Adriana at @Adriana_4812

This piece was reprinted by EmpathyEducates with permission or license. We thank the Author, Adriana Alvarez. for her kindness, and for doing all she can so that her son Manny, and indeed, all our children will not have to be a Single, Minimum-Wage Fast Food worker. We also wish to express our appreciation for Medium‘s, Working Parents in America and their endeavors.