This Is Only a Test 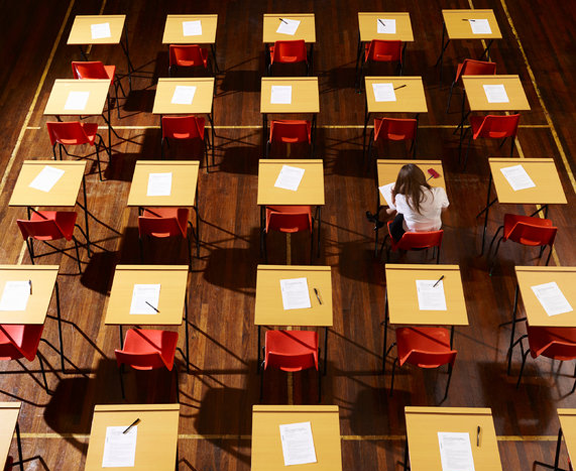 Tim Macpherson/STONE+, via Getty Images
Carefully read the instructions on the cover of the test booklet.
By Jonathan Kozol | Originally Published at The New York Times September 26, 2013

Over the past 20 years, a rising tide of voices in the world of public policy has been telling us that public education has fallen into an abyss of mediocrity. Our schools are “broken,” the mantra goes. Principals and teachers — their lack of “rigor” and “low expectations” for their students — are the primary offenders. The problem can be “fixed” only if schools are held to strict accountability. “No excuses” are to be permitted.

The pressure intensified in 2002 with the enactment of the federal testing law No Child Left Behind, which mandated high-stakes standardized exams that were supposed to bring every child to “proficiency” by the year 2014. When it grew apparent that this goal would not be reached, privatizing leaders pounced, offering business-modeled interventions as, perhaps, the only viable solution. Prominent figures in financial circles and at large foundations became interested in charter schools, encouraged their expansion and provided grant support to some of them. Others, with less philanthropic motives, saw a market opportunity and started running charter schools for profit. What had been a slowly growing movement now became a juggernaut.

Diane Ravitch was for many years one of the strongest advocates for the testing-and-accountability agenda. Because of her impeccable credentials as a scholar and historian of education, she was a commanding presence among critics of our schools. Some years ago, however, she reconsidered her long-held beliefs and, in an influential book, “The Death and Life of the Great American School System,” parted ways with her former allies and joined the highly vocal opposition.

In her new book, “Reign of Error,” she arrows in more directly, and polemically, on the privatization movement, which she calls a “hoax” and a “danger” that has fed on the myth that schools are failing. Scores go up and down from year to year — usually, as she explains, because the testing instruments are changed and vary in their difficulty. But, pointing to the National Assessment of Education Progress, which has sampled math and reading scores every two years since 1992 and, in an alternate version, every four years since the early 1970s, Ravitch demonstrates that levels of achievement have been rising, incrementally but steadily, from one decade to the next. And — surprise! — those scores are now “at their highest point ever recorded.” Graduation rates are also at their highest level, with more young people entering college than at any time before.

Black and Hispanic children, nonetheless, continue to lag behind. The black-white gap, as Ravitch documents, narrowed greatly in the era of desegregation, but progress has slowed as the hyper-segregation of our schools and neighborhoods along both racial and economic lines has come to be accepted once again as the normal order of the day. Market competition has not reduced the gap. Charter schools — Ravitch says we ought to ban those that operate for profit — have an uneven record. They “run the gamut from excellent to awful” and, on average, do no better than their public counterparts. Those that claim impressive gains are often openly or subtly selective in the children they enroll. Most do not serve children with severe disabilities. Others are known to counsel out or expel problematic students whose performance might depress the scores.

What passes for reform today, Ravitch writes, is “a deliberate effort” to replace public schools with a market system. The “unnatural focus on testing” has produced “perverse but predictable results.” It has narrowed curriculums to testable subjects, to the exclusion of the arts and the full capaciousness of culture. And it has encouraged the manipulation of scores on state exams. “Teaching to the test, once considered unprofessional and unethical,” is now “common.”

All of this, she says, has continued unrelentingly under the administration of President Obama, who has given “full-throated Democratic endorsement” to “the longstanding Republican agenda.” The president’s signature education package, Race to the Top, is “only marginally different from No Child Left Behind.” In fact, it compounds the damage by requiring that states evaluate teachers, partially at least, on the basis of yearly gains in students’ scores — no matter if the teacher has a different group of children from year to year, which is usually the case, and no matter whether a teacher has more troubled children, or more with disabilities, than another teacher who comes up with higher scores.

In its funding practices, the White House has “abandoned equity as the driving principle of federal aid,” offering new funds on condition that states expand the scope of competition by opening more charter schools and outsourcing normal functions of public schools to private agencies. This, Ravitch says, is “the first time in history” the government has “designed programs with the intent of stimulating private-­sector investors to create for-­profit ventures in American education.”

Ravitch has her own ideas about how to elevate the quality of education. Among her proposals: vastly expanded prekindergarten programs introducing children to “the joyful pursuit of play and learning”; more comprehensive medical and mental-health provisions (“every school should have a nurse, a psychologist, a guidance counselor”); smaller classes (like those in costly private schools); and diagnostic testing that, unlike a standardized exam, shows us where a child needs specific help — but, because it’s not judgmental, casts no cloud of anxiety over learning.

In the long run, she puts her faith in teachers but wants to strengthen the profession with higher entry standards. We can’t rely on “enthusiastic amateurs” who teach short term, any more than we’d rely on amateur physicians. She rejects stick-and-carrot incentives like merit pay — “the idea that never works and never dies,” and that undermines the spirit of collaboration by pitting teacher against teacher. She also deplores humiliating practices like publishing teachers’ names beside students’ test scores, as has been done in California and New York.

If we are to cast about for international comparisons, Ravitch urges us — this is not a new suggestion but is, I think, a useful one — to take a good, hard look at Finland, which operates one of the most successful education systems in the world. Teachers there, after competing for admission to schools of education and then receiving a superb course of instruction, are “held in high regard” and “exercise broad autonomy.” They are not judged by students’ test scores, because “there are no scores.” The country has no charter schools and no “Teach for Finland.” But, as Ravitch reminds us, there is one other, crucial difference: “Less than 5 percent of children in Finland are growing up in poverty.” In the United States, 23 percent do.

Again and again, she returns to this: “Our urban schools are in trouble because of concentrated poverty and racial segregation,” which make for a “toxic mix.” Public schooling in itself, she emphasizes, is “in a crisis only so far as society is and only so far as this new narrative of crisis has destabilized it.”

In her zeal to deconstruct that narrative, Ravitch takes on almost all the well-known private-sector leaders and political officials — among them Arne Duncan, Joel Klein, Bill Gates, Wendy Kopp and Michelle Rhee — who have given their encouragement, or barrels of their money, to the privatizing drive. It isn’t likely they’ll be sending her bouquets. Those, on the other hand, who have grown increasingly alarmed at seeing public education bartered off piece by piece, and seeing schools and teachers thrown into a state of siege, will be grateful for this cri de coeur — a fearless book, a manifesto and a call to battle.

Jonathan Kozol is a former fourth-grade teacher and the author of “Savage Inequalities,” “The Shame of the Nation” and, most recently, “Fire in the Ashes.”