Brown at 60: Great Progress, a Long Retreat and an Uncertain Future

Marking the 60th anniversary of the landmark U.S. Supreme Court decision Brown v Board of Education, the UCLA’s Civil Rights Project/Proyecto Derechos Civiles assessed the nation's progress in addressing school segregation, and found that--contrary to many claims--the South has not gone back to the level of segregation before Brown. It has, however, lost all of the additional progress made after l967, but is still the least segregated region for black students. New statistics show a vast transformation of the nation’s school population since the civil rights era. The authors reveal that Latinos are significantly more segregated than blacks in suburban America. 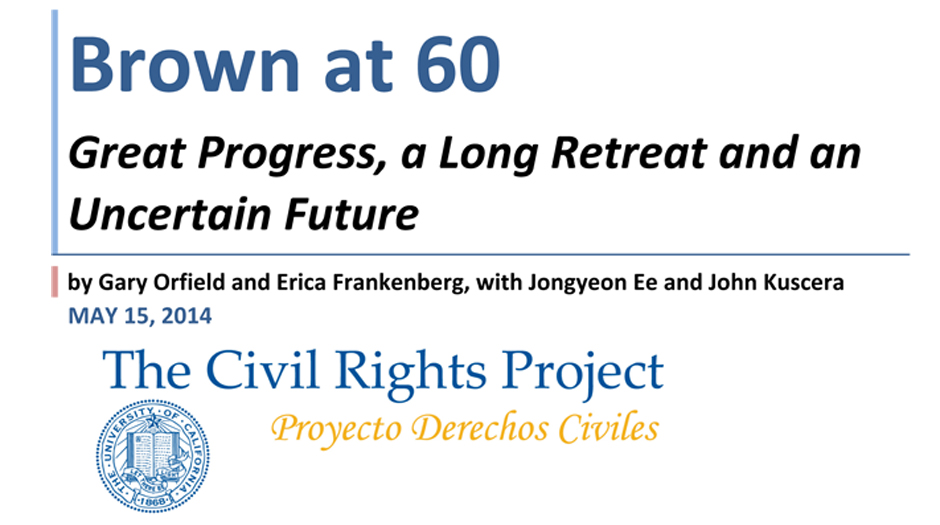 New national statistics show a vast transformation of the nation’s school population since the civil rights era. Particularly dramatic have been an almost 30% drop in white students and close to quintupling of Latino students. The nation’s two largest regions now have a majority of what were called “minorities” and whites are only the second largest group in the West. The South, always the home of most black students, now has more Latinos than blacks and is a profoundly tri-racial region.

Desegregation progress was very substantial for blacks, and occurred in the South from the mid- 1960s to the late l980s. Contrary to many claims, the South has not gone back to the level of segregation before Brown. It has lost all of the additional progress made after l967 but is still the least segregated region for black students.

The growth of segregation has been most dramatic for Latino students, particularly in the West, where there was substantial integration in the l960s, and segregation has soared. A clear pattern is developing of black and Latino students sharing the same schools; it deserves serious attention from educators and policymakers.

Segregation is typically segregation by both race and poverty. Black and Latino students tend to be in schools with a substantial majority of poor children, but white and Asian students are typically in middle-class schools.

The Supreme Court has fundamentally changed desegregation law, and many major court orders have been dropped. Our statistical analysis shows that segregation increased substantially after the plans were terminated in many large districts.

A half century of research shows that many forms of unequal opportunity are linked to segregation. Further, research also finds that desegregated education has substantial benefits for educational and later life outcomes for students from all backgrounds (see research summary and sources in Appendix A).

We conclude with recommendations about how we might pursue making the promise of Brown a reality in the 21st century. Desegregation is not a panacea and it is not feasible in some situations.

Where it is possible– and it still is possible in many areas– desegregation properly implemented can make a very real contribution to equalizing educational opportunities and preparing young Americans for the extremely diverse society in which they will live and work and govern together. Many of the states that rank high on the measures of most integrated for black students are states that are also very high in white percentage of students. Typically they are Midwest or Border states, such as West Virginia and Iowa, each with only 5% black students. (To be included in this analysis, the state had to have at least 5% black students.) Despite the relatively high percentage of white students in the Northeast, none ranks as providing the most integrated experiences for black students, possibly due to the high fragmentation and residential segregation in this region. 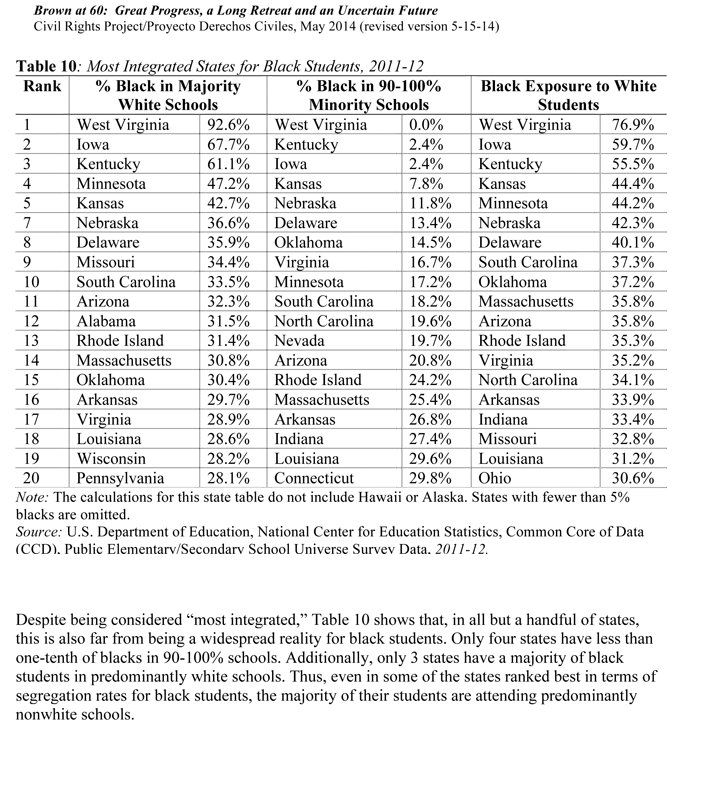 Despite being considered “most integrated,” Table 10 shows that, in all but a handful of states, this is also far from being a widespread reality for black students. Only four states have less than one-tenth of blacks in 90-100% schools. Additionally, only 3 states have a majority of black students in predominantly white schools. Thus, even in some of the states ranked best in terms of segregation rates for black students, the majority of their students are attending predominantly nonwhite schools. 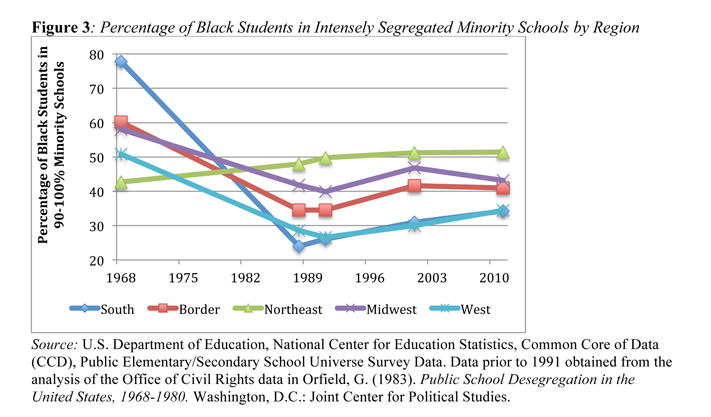 Except for Texas (in two of three categories), no Southern state is in the top five in terms of most segregated states for black students. Despite the recent reversals in segregation, this is another indication that the combined effects of Brown and the 1964 Civil Rights Act have resulted in durable improvement in the desegregation of southern schools for black students. Many Deep Southern states and adjacent states are found in at least two measures of segregation here: Georgia, Alabama, Mississippi, Louisiana, Tennessee, and Florida. Most of these states enroll a substantial share of black students; in many, blacks were at least one-third of their state enrollment. (Maryland, a Border state, also had a high percentage of black students.)

Thus, the fact that these states rank relatively high on segregation measures means that school segregation impacts substantial numbers of black students. Most of the non-southern states listed had relatively small overall shares of black students (usually no larger than 20%), but the black enrollment might be clustered in overwhelmingly nonwhite urban districts, which influence a state’s ranking. For example, New York City has a large share of New York State’s black enrollment, as does Chicago for Illinois. Both of these urban districts have few white students. In 4 states, a majority of black students attend intensely segregated 90-100% minority schools, and in all 20 states at least one in 4 black students in the state attends such intensely segregated schools.