Why Have We Been So Disappointed? What Have We Learned?

By Richard Rothstein | Originally Published at The Economic Policy Institute.

May 17 is the 60th anniversary of Brown v. Board of Education, the U.S. Supreme Court’s 1954 decision that prohibited Southern states from segregating schools by race. The Brown decision annihilated the “separate but equal” rule, previously sanctioned by the Supreme Court in 1896, that permitted states and school districts to designate some schools “whites-only” and others “Negroes-only.” More important, by focusing the nation’s attention on subjugation of blacks, it helped fuel a wave of freedom rides, sit-ins, voter registration efforts, and other actions leading ultimately to civil rights legislation in the late 1950s and 1960s. But Brown was unsuccessful in its purported mission—to undo the school segregation that persists as a central feature of American public education today. This issue brief highlights key elements of the American education system that have evolved in the wake of Brown:

Brown v. Board of Education, the Supreme Court’s unanimous school desegregation decision whose 60th anniversary we celebrate on May 17, had enormous impact. Its narrow result was to annihilate the “separate but equal” rule, previously sanctioned by the Supreme Court in 1896, that permitted states and school districts to designate some schools for “whites-only” and others for “Negroes-only.”1

But more important, the Brown decision focused the nation’s attention on black subjugation in a fashion not seen since Radical Republicans attempted to reconstruct the South after the Civil War. Brown’s 1954 success in highlighting the nation’s racial caste system gave encouragement to a wave of freedom rides to desegregate interstate transportation, to national support for Rosa Parks’ determination to desegregate local buses and other public facilities, to lunch counter sit-ins to desegregate restaurants and other public accommodations, to heroic efforts to register African Americans in the Deep South to vote, and to confrontations over admission of African Americans to southern universities. It also spurred civil rights legislation in 1957, 1960, 1964, 1965, and 1968 that, in combination, undid the nation’s legal support for race-based status. None of this would have taken place without Brown..”2

But Brown was unsuccessful in its purported mission—to undo the school segregation that persists as a modal characteristic of American public education today. When the Supreme Court handed down its decision on May 17, 1954, Thurgood Marshall, head of the NAACP Legal Defense and Educational Fund (LDF) and chief attorney for the plaintiffs, predicted that there would be “no organized resistance” to the Supreme Court’s order and that schools nationwide would be fully desegregated “in up to five years,” ensuring that black children throughout the nation would have educations that would gain them entry to skilled jobs and colleges on an equal basis with whites..”3

In 1967, President Lyndon Johnson appointed Marshall to the Supreme Court where he spent the next 24 years in a fruitless struggle to prevent the perpetuation of school segregation, and indeed its exacerbation, after an initial rollback.

Today, things are getting worse. The typical black student now attends a school where only 29 percent of his or her fellow students are white, down from 36 percent in 1980. Subsequently, the courts, over Marshall’s and other pro-integration justices’ objections, began to free southern school districts from orders compelling them to adopt deliberate policies to integrate..”4 In fact, black children are more racially and socioeconomically isolated today than at any time since data have been collected..”5 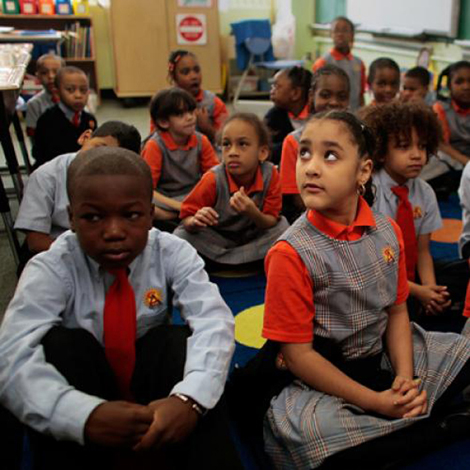 Photograph; 60 years later. Students in New York’s segregated schools. | Chris Hondros/Getty[/fusion_builder_row_inner] Of course, Brown did accomplish a great deal, even with respect to school desegregation. Although today, typical black students in Southern states attend schools where only 29 percent of their fellow students are white, in 1954 the percentage was zero. (Here, too, however, we are now going backwards: In 1980, the percentage for Southern states was 40 percent.).”6 This progress from 1954 to the present is shamefully inadequate, but it is not nothing.

Black student achievement, nationwide, and in every state, has improved at a spectacular rate since Brown. Although we don’t have a reliable measure of achievement going back very far in time, we have good data for the last few decades, from the federal sampled test of math and reading, the National Assessment of Educational Progress (NAEP). It shows, for example, that black fourth-graders now have average math scores that are better than average white math scores only a generation ago. Yet because average white achievement has also improved, the gap between black and white achievement remains. The average black student still performs better than only about 25 percent of white students, making the goal of equal qualification for the labor market a distant and daunting goal..”7

All that ended with Brown. Although not the intent of the Legal Defense Fund, Marshall, or the other plaintiff attorneys, the case did provoke Southern states to make schools for blacks and whites more nearly equal, if still largely separate.

We are today considerably more knowledgeable about the challenges to student achievement posed by race and social class status than we were in 1954, if less motivated to do much to address them. Here is some of what we now know:

Resource equality is not enough

Per-pupil spending on black and white students today is now roughly equal (compared with the disparities of 60 years ago), but students who come to school with the handicaps of lower-social-class status need a lot more resources, not just a little more, and certainly not the same as those enjoyed by white middle-class students.

In the Brown case, psychologist Kenneth Clark travelled to Clarendon County (and to other school districts whose cases were combined with Brown) to test the self-concept of young black children. He gave them black and white dolls from which to choose and concluded that the children had more positive feelings about the white dolls. The plaintiffs used his evidence to support their demand for desegregation. Chief Justice Earl Warren was sufficiently impressed to cite it in the Supreme Court’s unanimous decision.

In retrospect, the study seems flawed for the purpose for which it was used: When Clark conducted the same exercise with black students in Northern integrated schools, he got similar results, suggesting that it was not school segregation, but a more generalized caste system, present in the North as well, that produced what Warren characterized as a “feeling of inferiority as to their status in the community that may affect their hearts and minds in a way unlikely ever to be undone.”.”13

Today, we know much more about how school segregation itself produces lower achievement for children from lower-social-class backgrounds..”14 Feelings of inferiority are but a small part of the explanation.

The schools black children attend today, in North and South, East and West, are segregated mostly because their schools are located in segregated neighborhoods. In some small cities and towns, schools can be integrated by adjusting attendance zones, establishing magnet schools, or implementing controlled choice programs. But in major metropolitan areas, places like Atlanta, Baltimore, Chicago, Cleveland, Detroit, New York, St. Louis, and so on, distances between ghetto and suburb are too great, and school district jurisdictional lines too established, for these methods to accomplish significant integration. Schools cannot be integrated unless the neighborhoods where they are located are integrated; in particular, by making housing opportunities for low-income, black, urban residents available in white middle-class suburbs.

As it turns out, the most important school policies are housing policies, and we pursue too few of them, and too weakly. Low-income working families are eligible for vouchers to supplement their rental payments up to market rates, even in middle-class communities, but the voucher program is barely funded, and when families do get vouchers, landlords in middle-class communities typically refuse them, so the vouchers perpetuate rather than reduce segregation..”15 Suburbs maintain zoning ordinances that prevent construction of low- and moderate-income housing, rendering federal subsidies for such housing less useful to combat segregation. Government programs encourage the destruction of public housing ghettos but make inadequate provision for rehousing the displaced residents, many of whom are then forced to leave their gentrifying neighborhoods to seek homes in newly segregating inner-ring suburbs..”16

In a short while, following the conclusion of a comment period, the U.S. Department of Housing and Urban Development plans to issue a rule requiring all municipalities, including white suburbs, to abide by the 1968 Fair Housing Act’s requirement that they follow policies to “affirmatively further fair housing,” i.e., to integrate..”17

Whether and to what extent this rule is enforced will determine whether the failed promise of Brown can be fulfilled.

Richard Rothstein (http://www.epi.org/people/richard-rothstein/) is a research associate of the Economic Policy Institute and senior fellow at the Chief Justice Earl Warren Institute on Law and Social Policy at the University of California, Berkeley, School of Law. He is writing a book on the history of residential segregation and can be contacted at riroth@epi.org.

1. The Supreme Court’s unanimous opinion, authored by Chief Justice Earl Warren in Brown v. Board of Education of Topeka, 347 U.S. 483 (1954), is available online at http://supreme.justia.com/cases/federal/us/347/483/case.html. A brief history and summary of the decision is posted on the United States Courts website, http://www.uscourts.gov/educational-resources/get-involved/federal-court-activities/brown-board-education-re-enactment/history.aspx.

2. The 1957 Civil Rights Act established a U.S. Commission on Civil Rights to investigate discrimination in voting rights, authorized the U.S. Attorney General to prosecute violations, and prohibited exclusion from federal juries based on race. The 1960 act improved federal judges’ authority to protect voting rights. The 1964 act required voting eligibility requirements (which it did not eliminate) to be applied to all citizens equally, prohibited segregation in public but privately owned accommodations (motels, restaurants, etc.) as well as in public facilities, authorized the Attorney General to file school desegregation suits, strengthened the U.S. Civil Rights Commission, and prohibited discrimination by state and local agencies receiving federal funds. The 1965 act (the Voting Rights Act) established federal supervision of election procedures, especially in states that had historically discriminated against African Americans’ right to vote; this supervision was recently weakened by the Supreme Court. The 1968 act (the Fair Housing Act) prohibited racial discrimination in the sale and rental of most housing.

3. The most comprehensive account of the Brown case, and the LDF’s long pursuit of desegregation that culminated in Brown , is Richard Kluger’s 1975 book Simple Justice (New York: Random House). In the 1975 two-volume edition, the account of the LDF’s press conference following the Supreme Court’s ruling is found on p. 902, based on the following newspaper articles: New York Times, “N.A.A.C.P. Sets Advanced Goals,” May 18, 1954; Luther A. Huston, “1896 Ruling Upset,” New York Times, May 18, 1954.

4. The 29 percent figure is for 2010. For data on 2010, see Genevieve Siegel-Hawley and Erica Frankenberg, Southern Slippage. Growing School Segregation in the Most Desegregated Region of the Country, The Civil Rights Project, September 2012, revised October 18, 2012, Table 5, http://civilrightsproject.ucla.edu/research/k-12-education/integration-and-diversity/mlk-national/southern-slippage-growing-school-segregation-in-the-most-desegregated-region-of-the-country/hawley-MLK-South-2012.pdf. For data on 1980, see Gary Orfield, Public School Desegregation in the United States, 1968-1980, Joint Center for Political Studies, Washington, D.C., 1983, Table 7. These data and their implications, including a discussion of how racial isolation declined from the Brown decision until 1980, and has increased since then, are discussed in more detail in Richard Rothstein, For Public Schools, Segregation Now, Segregation Since: The Unfinished March, Economic Policy Institute, Washington, D.C., 2013, http://s2.epi.org/files/2013/Unfinished-March-School-Segregation.pdf.

8. A full description of the unequal status of Clarendon County schools, litigated in Brown v. Board of Education , can be found in Simple Justice, pp. 9, 417–418. Kluger also describes conditions in the other districts whose cases were combined with Clarendon County in the Brown decision.

17. The Department of Housing and Urban Development provides a summary of the rule and rule text at its “Affirmatively Furthering Fair Housing Proposed Rule” web page, http://www.huduser.org/portal/affht_pt.html. Comments on the proposed rule by the Poverty and Race Research Action Council (PRRAC), and other civil rights groups are available on PRRAC’s website at http://www.prrac.org/full_text.php?item_id=14252&newsletter_id=0&header=Current%20Projects. Forty-five years ago, HUD proposed similar action, but it was cancelled by President Nixon. For an account, see Richard Rothstein and Mark Santow, A Different Kind of Choice, Economic Policy Institute, Washington, D.C., 2012, http://www.epi.org/files/2012/Different_Kind_Of_Choice.pdf.