Co-location Report Says, ‘Trust Us,’ Instead of Showing Its Work 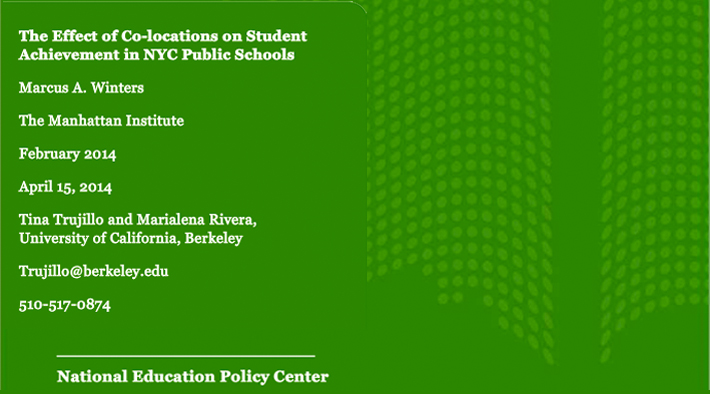 Reference Publication:
Review of The Effect of Co-locations on Student Achievement in NYC Public Schools

Trujillo and Rivera reviewed The Effect of Co-locations on Student Achievement in NYC Public Schools, written earlier this year by Marcus Winters and published by the Manhattan Institute.

The Effect of Co-locations argues that its data analyses show no statistical impact on traditional public school student achievement in New York City resulting from co-locations of charter schools with traditional public schools. The underlying issue has garnered recent interest as a result of the election of Bill DeBlasio as New York City mayor and the resulting shift away from former mayor Michael Bloomberg’s education policies.

In their review, Trujillo and Rivera write that the Manhattan Institute report omits details about its analysis that would enable readers to evaluate the merits of its methods and its claims. Additionally, they write, the report does not examine existing related research or background information on co-locations. The reviewers also point out the report’s decision to reject any consideration of “important outcomes related to students’ socio-emotional development, safety, health, and broader academic experiences.”

As a consequence of its shortcomings, “The report ultimately serves more as a marketing tool for the continued growth of charter schools in New York City than as a carefully presented research study,” the reviewers conclude. It therefore offers neither policymakers nor educators adequate information to evaluate co-location’s impact on students’ educational experiences and outcomes.

Find the review by Tina Trujillo and Marialena Rivera on the NEPC website at:
http://nepc.colorado.edu/thinktank/review-effect-of-co-locations

Find The Effect of Co-locations on Student Achievement in NYC Public Schools, by Marcus Winters, on the web at:
http://www.manhattan-institute.org/html/cr_85.htm#.UzHYmmDxjH8.

The Think Twice think tank review project (http://thinktankreview.org) of the National Education Policy Center (NEPC) provides the public, policymakers, and the press with timely, academically sound reviews of selected publications. NEPC is housed at the University of Colorado Boulder School of Education. The Think Twice think tank review project is made possible in part by support provided by the Great Lakes Center for Education Research and Practice.

The mission of the National Education Policy Center is to produce and disseminate high-quality, peer-reviewed research to inform education policy discussions. We are guided by the belief that the democratic governance of public education is strengthened when policies are based on sound evidence. For more information on the NEPC, please visit http://nepc.colorado.edu/.

This review is also found on the GLC website at http://www.greatlakescenter.org/.