There are 16.4 million American children living in poverty. That’s nearly one quarter (22.6 percent) of all of our children. More alarming is that the percentage of poor children has climbed by 4.5 percent since the start of the Great Recession in 2007. And poor means poor. For a family of three with one child under 18, the poverty line is $18,400.
Meanwhile, the stock market is booming. Banks, hedge funds and private equity firms are making tens of billions of dollars again. In fact, their bonuses are expected to climb by 5 to 10 percent this year, while Wall Street banks doll out $91.44 billion in bonus money.

Most amazing of all is the fact that 95 percent of the so-called “recovery” has gone to the top 1 percent who have seen their incomes rise by 34 percent. For the 99 percent there’s been an undeclared wage freeze: the average wage has climbed by only 0.4 percent.

To add to the misery, Washington has decided that the best way to tackle childhood poverty is to have poor kids eat less. Both parties already have agreed to cut billions from the Supplemental Nutrition Assistance Program (Food Stamps). As of November 1, payments dropped from $668 a month to $632 for more than 47 million lower-income people — 1 in 7 Americans, most of them children.

And more cuts are coming. The Tea Party House passed a bill to cut food stamps by $4 billion a year, while the Democratic-controlled Senate calls for $400 million in cuts. How humane! And since it will be part of the omnibus Farm Bill, President Obama will sign it. (I wonder how our former community organizer will explain this to the poor children he once tried to help in Chicago.)

But that’s just the start. More austerity is coming in the form of cuts to Social Security as well as a host of other social programs. When times get tough, you’ve got to suck it up and take more from the poor.

It gets even more revolting when we realize that the financial billionaires who are profiting so handsomely from the recovery are the very same who took down the economy in the first place. They were the ones who created and pedaled the toxic securities that puffed up and then burst the housing bubble. Those financial plutocrats caused 8 million workers to lose their jobs in a matter of months. Those bankers, hedge fund honchos and fund managers are directly responsible for the rise in child poverty rates. Washington bailed out those billionaires and is now asking the poor and the middle class to pay for the ensuing deficits with further cuts in social programs at every level of government.

Why do we put up with such injustices?

Washington Is in Wall Street’s Pocket

Before we entirely succumb to financial amnesia, let’s recall how we got here. Since the late 1970s, the financial sector has been on a crusade to remove any and all financial regulations. The goal was to undo all the controls put in place during the Great Depression that so effectively curtailed financial speculation and outright gambling. Once deregulated Wall Street engineered a Ponzi-like housing bubble that netted it astronomical sums. By the time it burst in 2007, 40 percent of all corporate profits flowed into the financial sector. Wall Street wages grew by leaps and bounds. 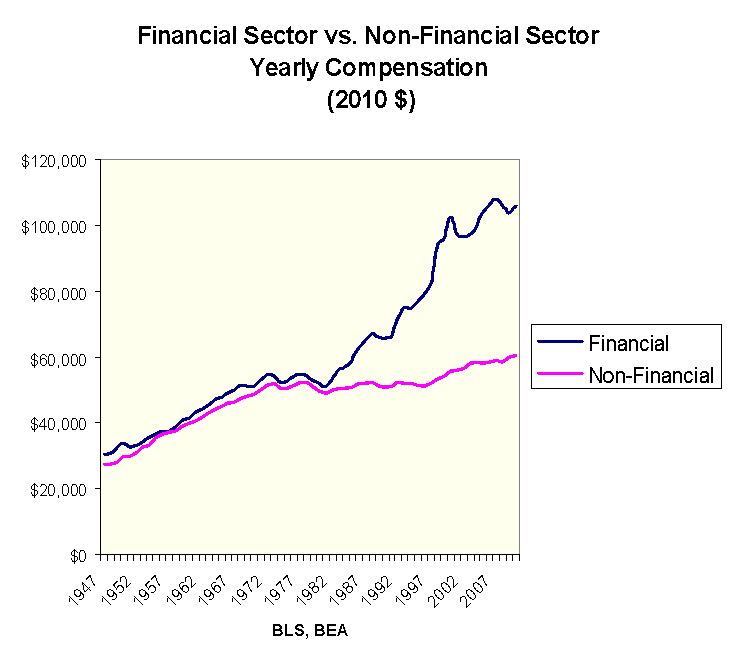 As the crash hit, all the largest Wall Street firms, not just Lehman Brothers and Bear Stearns, were in serious trouble. Had AIG gone under, so would nearly every major bank and investment house, along with thousands of hedge funds that depended on AIG to insure its toxic bets. So Wall Street’s Washington cadre engineered a $13 trillion bailout consisting of cash, no interest loans and a program by which the Federal Reserve would buy up Wall Street’s toxic waste at par value. To produce a financial recovery, the Fed also drove down bond interest rates which in turn drove money into the stock market, sending it to new heights.

Here’s the best of all. After getting $480 billion in bailout cash, the top financiers in the country paid themselves more than $150 billion in bonus money for a job well done. Is this a great country or what?

What didn’t happen is this: Mortgages were not written down in mass to assist underwater home owners and those who suffered from predatory loans. No lasting jobs programs were created to put the unemployed back to work. No lasting penalties were paid by the individuals who took down the economy. And there was no serious effort at all to cap financial wages and bonuses in the name of justice.

All in all, you could not have designed a more perfect program to enrich the rich and do absolutely nothing for the 99 percent — and as a result, sink ever more children into poverty.

Waiting for the Recovery That Will Never Come

We are constantly told that the recovery is just around the corner. Liberals say we need more stimulus. Conservatives call for more austerity and cuts in regulations. But all agree that sooner or later more growth will benefit the 99 percent. Unfortunately, it’s not happening and it won’t happen. Here’s why.

First of all, they assume that trickledown actually works, that there is something mechanical within our heavily financialized economy that will bring renewed prosperity to the 99 percent. They look back at previous recessions and recoveries and continue to believe that slumps are followed by renewed growth and income gains for all.

But as financialization has spread throughout the economy, new mechanisms are in place that siphon off wealth into financial gains for the very few. Productive enterprises are turned into financial enterprises that are loaded up with debt and then carved and slaughtered so that wealth can be extracted for hedge funds and private equity firms. In our brave new financialized economy renewed growth turns into renewed incomes primarily for the investment class. The stock market will rise but jobs and incomes won’t. The traditional capitalist slump-recovery process died more than a decade ago. Adam Smith’s invisible hand no longer produces shared prosperity — instead it picks our pockets.

Waiting for the Political Pendulum to Swing

Second, we are told how America is essentially a moderate country — how there’s a kind of invisible political pendulum that swings from the extremes back to the sensible center. When the left or the Tea Party gets too wild, the center supposedly pulls them back and common sense economics prevails. (e.g. the McAuliffe, Christie victories).

But this consoling media meme obscures the fact that our politics are moving ever more rightward. Today’s “moderate” Democrats and Republicans (McAuliffe, Christie) are to the right of Eisenhower, Nixon and even Herbert Hoover. They have already agreed to cut the very entitlements that are needed to help alleviate poverty. In fact, they have agreed it’s quite OK for America to have 442 billionaires and also have 22.6 percent of its children living in poverty. The sensible center now sees its role as forging a “compromise” on how much to cut food stamps and other supports for the poor.

Obviously, both political parties lose little sleep worrying about economic injustices. Here’s a quiz: What is the Democratic Party’s plan to eradicate poverty? Answer: It hasn’t had one since the 1960s. Now, the Democrats view that kind of idealistic thinking as “unrealistic” in the real world where politicians have to make peace with billionaires in order to survive. As for the poor, alas, they will always be with us.

Not a day goes by without hearing about how God blesses “American exceptionalism.” We are told by our leaders and pundits that we are the best, the greatest, the mightiest and the most democratic of all nations. It is our mission in life to uphold justice and freedom around the world. But as this chart shows, when it comes to child poverty, we are just about dead last. 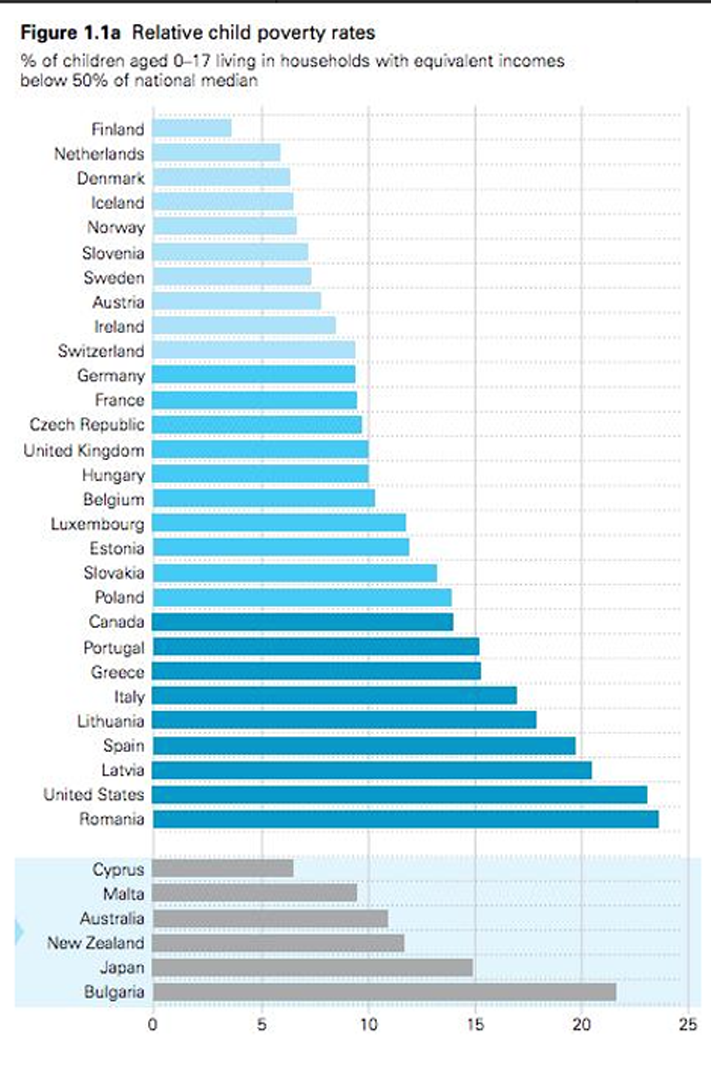 Why is that? Because in wealthy nations, children live in poverty if and only if that nation allows it. Our nation, the richest in history, has more than enough wealth to go from the bottom of this list to the top, right next to Finland, if only we decided to act justly.

America has 442 billionaires with an average net worth of $4.2 billion each according to Forbes. That means collectively these 442 Americans have nearly $1.9 trillion in wealth.

During the current “recovery,” these 442 billions saw their wealth rise on average by over 12 percent per year to a current total of nearly $1.9 trillion. What would happened if those billionaires received only 6 percent a year and the other 6 percent ($111.4 billion) was taxed away in order to pull all of our children out of poverty?

That 6 percent would provide sufficient revenue so that each child now living in poverty would receive an extra $7,000 per year which would pull nearly all of their families above the poverty line. The 442 billionaires would not suffer. No one in their families would go hungry. No luxury goods or services would be out of reach. No cooks, maids, chauffeurs or pilots would have to be let go. The 442 billionaires would feel no pain at all — not even an itch. As a result of this painless tax, America would eradicate childhood poverty overnight.

Of course, our simple proposal sounds insane in a world where austerity reigns supreme and where billionaires are immune from such distributive proposals. But I wonder who is sane and who isn’t. It seems utterly psychotic to live in a society that chooses to spread poverty to its young. It also seems psychotic to claim that cuts in food stamps are good for the poor while at the same time saying that it’s quite OK for billionaires to pile up unearned, tax-sheltered income, and even receive federal farm subsidies from the very farm bill that contains food stamps cuts. The fact that we’re putting up with all this should be driving us all insane.

Sooner or later, the millions of Americans who still have souls that ache for justice will take democracy into their own hands. I don’t know how it will happen or when, but one day we will eradicate needless poverty and reclaim our nation from those who are robbing it blind.

The is an updated article that originally appeared in Alternet.org.)

Les Leopold is the director of The Labor Institute and author of How to Make a Million Dollars an Hour: Why Hedge Funds get away with siphoning of America’s Wealth (Wiley 2013)

<After graduating from Oberlin College and Princeton University’s Woodrow Wilson School of Public and International Affairs (MPA 1975), Les co-founded and currently directs two non-profit educational organizations: The Labor Institute (1976) and the Public Health Institute (1986). He designs research and educational programs on occupational safety and health, the environment and economics.

Leopold is the author of Runaway Inequality: An Activists Guide to Economic Justice: (Labor Institute Press, 2015), How to Make a Million Dollars an Hour: Why Financial Elites get away with siphoning off America’s Wealth (John Wiley and Sons, 2013), The Looting of America: How Wall Street’s Game of Fantasy Finance destroyed our Jobs, Pensions and Prosperity, and What We Can Do About It, Chelsea Green Publishing, June 2009, and The Man Who Hated Work and Loved Labor: The Life and Times of Tony Mazzocchi (Chelsea Green Publishing, 2007

This piece was reprinted by EmpathyEducates with permission or license. Grateful, we thank the Author, Les Leopold for his kindness, quality research, observations, and enduring efforts to bring equality to fruition.