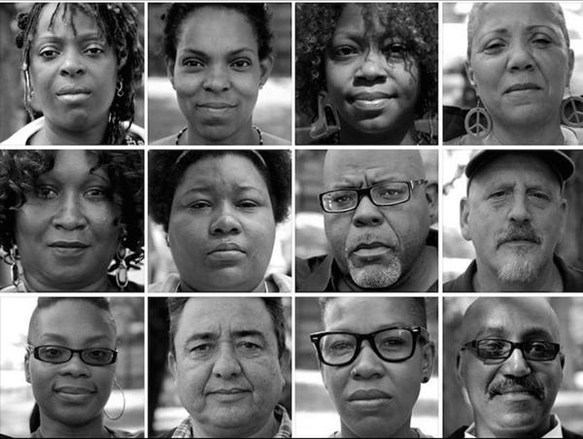 The national fight against school privatization is focused on Chicago. September 9 is the 24th day of the #FightForDyett hunger strike. Parents and community members are resisting the national polices of school privatization being forced down our throats by the Obama administration and often black politicians across the country. Successful schools are a key to viable communities.

The unfolding struggle around the privatization of public education in black neighborhoods, the unspoken policy of the Obama administration since its first hours, is, along with the struggle to roll back the police and prison state itself, arguably the most important one facing African American communities as we near the end of the Obama era. And right now no place epitomizes that struggle than the Bronzeville community of Chicago’s south side, where since August 16 12 parents, educators and community activists have been on hunger strike.

The Dyett 12, as the #FightForDyett hunger strikers are called, are demanding that the city honor the community’s painstakingly detailed plan for an open enrollment community-led high school, a plan for which they have labored and fought for more than a decade.

It’s been an uphill journey. Chicago has never had an elected school board. Near the end of 45 years of rule by two mayors named Richard Daley, the second of these nailed down direct mayoral control of the city’s schools, and was among the first school districts in the nation to appoint non-educator “CEOs” rather than educators to head it.

Rahm Emanuel succeeded the second Richard Daley as the city’s mayor only because President Obama returned to Chicago to personally campaign for his former chief of staff. Soon after Emanuel’s election, the mayor had a get-acquainted dinner with Chicago Teachers Union president Karen Lewis. At one point during the evening, the mayor remarked that that a good quarter of all the city’s children would never amount to much, and that he was determined not to throw money at it. The teachers union president of course made the mayor’s callous and intemperate remarks public, and he denied them, but no serious person doubts he did say these things.

Communities like Bronzeville, the heart of Chicago’s south side where African Americans have lived for about a century, have experienced systematic disinvestment in job-creating transit and infrastructure, in affordable housing and grocery stores, in health care and mental health services, and of course disinvestment in its families and its children. After the piecemeal closings of more than 60 public schools over several years, and the firing of thousands of mostly black teachers who mostly lived in and made up the activist backbones [2] of the communities they served, members of the Chicago Teachers Union in 2009 successfully sued City Hall for racially targeted mass firings.

In the current jargon, these schools were “turned around”, stripped of the powerful and educationally successful parent councils activists won during the brief administration of Harold Washington in the 1980s. Some were temporarily reorganized as no-frills “public schools” with no recess, no music, arts, sports or science, but plenty of profitable test-prep. The rest were speedily handed over to private charter school operators run by friends and cronies of the mayor and the city’s elite. In every case, non-teaching employees were replaced by minimum wage contract workers and experienced black teachers with younger, whiter less experienced ones, often Teach For America temps.

But after 45 years of Daley, Chicagoans have a tradition of resisting their unaccountable and unrepresentative local government. Community activists and a new leadership of the Chicago Teachers Union organized jointly throughout the city, so that when Mayor Emanuel, following the pro-privatization policies of the Obama administration, forced teachers out on strike in 2012, they enjoyed broad public support from among public school parents and communities, and the strike was partially successful in protecting teachers, students and communities. The respite was short-lived. With the new year, City Hall responded by proposing to close first 129, [3] then 100, and after a huge uproar settled on a few more than 50 public schools, including several high schools and elementary schools in the Bronzeville neighborhood where Dyett is.

It wasn’t national news, even though similar and simultaneous waves of school closings were happening in Philly [4] and New York, in Kansas City and Cleveland, in Atlanta and Jacksonville, in Detroit, in Tampa and in Baltimore. Creative accounting by state governments and by local officials, often black mayors, aldermen and others miraculously uncovered seven, eight and nine figure budget holes to justify school closings and mass firings, and school privatization as the only answer on offer.

It wasn’t national news because corporate media in each city barely covered the local story, didn’t deliver news of the unfolding national pattern. News coverage and the pronouncements of the pro-privatization politicians and functionaries rarely if ever used the p-word, privatization, to describe the deeply unpopular policy of the Obama administration. And all of it, from beginning to end in every city was co-signed by the urban black Democrats who we call our black misleadership class, black mayors, congressmen, state legislators, county and school board officias, the whole lot of them.

By this time, Dyett High School parents in Chicago’s Bronzeville had been fighting for years to improve their local high school. They won national recognition and made the school a leading educational light on the south side. Dyett won the ESPN Rise Up award, and led the city in the rising percentage of its children going to college, with the smallest number of suspensions citywide. Over several years they met with Chicago Public Schools officials in open rooms and behind closed doors, and before community town hall gatherings. They solicited partnerships with other institutions, and developed plans for expanding Dyett’s success. They proposed that Dyett be hooked to six neighboring elementary schools, feeder schools to create an educational village where parents and community would have input in the process from K through the 12th grade. The latest version of their plan [5] called for turning Dyett High School into a “Global Leadership and Green Technology” high school, the meaning of which, as far as objectives, curiculum and more are spelled out in their comprehensive plan.

City Hall spurned their efforts, preferring to turn Dyett over to what some of the hunger strikers call “mediocre charter school operators” intent on turning the school into a privatized holding tank for children on the way at best to precarious lives in shattered communities on the low-wage fringes of the labor market.

On August 16, 2015 parents and community members from Bronzeville, and allies in Pilsen and Uptown announced a hunger strike till the demands of Dyett’s parents and the Bronzeville community for a Dyett Global Leadership and Green Technology High School [6] are met. Hunger strikers met with the mayor’s staff, and held press conferences outside the offices of the Department of Education in DC.

As pressure built up in support of the hunger strikers, the black misleadership class rode to the mayor’s rescue. Mayor Emanuel announced that Dyett High School would not be closed after all, that it would reopen as an oppen enrollment school, but as an arts school without the community’s educational plan, its feeder schools, its green technology and global leadership components curriculum, without the community’s choice of principal, and without its elected local school council.

The mayor convened a gaggle of his black minions headed by none other than Congressman Bobby Rush, to accept his “generous offer” at a press conference and publicly urge the hunger strikers to do the same.

“There will be no negotiation,” said a mayoral spokesperson to the Dyett 12 and the communitiy they represent. “We are moving forward.”

The battle lines are clearly drawn, on the south side of Chicago and across the country. Healthy, sustainable communities are impossible without democratic local control over institutions and local resources. The notion of a viable community that does not control its own schools, a community with no control over its educational destiny is worse than a bad joke. The best schools have never been run by business people like businesses. The best schools have always been run by parents, teachers, students and communities working with each other. The best schools are democratically run, with their workers living in and accountable to the community, and unionized so they have a legal right to combine and plan and act jointly in their own and the community’s interest.

At the end of the Obama era, along with the struggle against the police and prison state itself, this is the fight for our right to be a community at all.

The black misleadership class in Chicago and nationally, along with its new-jack aspirants like the Campaign Zero/Teach For America crew, know what side they’re on. They stand for school privatization, for the gentrifying, the scattering, shattering and dissolution of what remains of urban African American communities. It’s the stand of Republicans and Democrats alike, and especially of big city mayors and the black urban Democrat regime that rules black politics these days.

Among national political parties, only the Green party has a firm position opposing privatization of public schools. There are also national formations like the opt-out movement, and others active on the side of justice too. But again, in Chicago, as in Philly, New York and elsewhere, Congressman Bobby Rush and the gaggle of black mayoral minions have taken their stand for privatization. They know which side they’re on.

The question for all and each of us now, is what side are YOU on. It’s time to #FightForDyett, to fight for our lives, our right to the city and to community. Before it’s too late. It’s time to ask every ostensibly black organization from motorcycle clubs and sororities to churches, businesses and block clubs, along with each and every one of us individually, which side are you on?

Which side are YOU on?

For up to the minute information on the #FightForDyett visit the Dyett Global Leadershipo and Green Technology HS [7] on Facebook. Do it NOW.

Bruce A. Dixon is Managing Editor at Black Agenda Report and a member of the state committee of the Georgia Green Party. He lives and works near Marietta GA and can be reached via email at bruce.dixon(at)blackagendareport.com..

To Review the Reference Links

This piece was republished by EmpathyEducates with the kind permission of the Author. Bruce A. Dixon. We thank Managing Editor Bruce A Dixon and The Black Agenda Report for their vision and for their enduring commitment to bring equality to fruition.