'(T)oday capitalism has outlived its usefulness. It has brought about a system that takes necessities from the masses to give luxuries to the classes.' ~ Martin Luther King Junior 1952

By Zaid Jilani | Originally Published at The Intercept. January 18 2016, 10:41 AM | Photographic Credit; Martin Luther King Jr. is accompanied by famed pediatrician Benjamin Spock, Father Frederick Reed, and union leader Cleveland Robinson during an anti-Vietnam War demonstration in New York on March 16, 1967.
America’s celebrations of Martin Luther King Jr. typically focus on his civil rights activism: the nonviolent actions that led to the Civil Rights Act of 1964 and the Voting Rights Act of 1965.

The last few years of King’s life, by contrast, are generally overlooked. When he was assassinated in 1968, King was in the midst of waging a radical campaign against economic inequality and poverty, while protesting vigorously against the Vietnam War.

This was a campaign whose intellectual roots were found in a younger King, who grew uneasy with the excesses of capitalism around him even as he focused on civil rights issues. In the summer of 1952, he wrote a letter detailing these concerns to Coretta Scott, whom he began dating earlier in the spring. In that letter, he concluded that “capitalism has outlived its usefulness”:

I imagine you already know that I am much more socialistic in my economic theory than capitalistic. And yet I am not so opposed to capitalism that I have failed to see its relative merits. It started out with a noble and high motive, viz, to block the trade monopolies of nobles, but like most human systems, it falls victim to the very thing it was revolting against. So today capitalism has outlived its usefulness. It has brought about a system that takes necessities from the masses to give luxuries to the classes.

Government officials tracked his growing radicalism, and feared it. “King is so hot these days that it looks like Marx coming to the White House,” complained President John F. Kennedy in 1963, as King was ramping up his nonviolence campaign in the South. He authorized his brother, Attorney General Bobby Kennedy, to wiretap King and his associates.

King was also increasingly disturbed by the war in Vietnam, and he would raise the issue privately with President Lyndon Johnson in their White House calls and meetings.

In April 1967, King gave a speech at Riverside Church in New York City where he called the U.S. government the “greatest purveyor violence in the world” and denounced napalm bombings and the propping up of a puppet government in South Vietnam.

The establishment responded bitterly to King’s speech. The New York Times editorial board blasted King for linking the war in Vietnam to the struggles of civil rights and poverty alleviation in the United States, saying it was “too facile a connection” and that he was doing a “disservice” to both causes. It concluded that there “are no simple answers to the war in Vietnam or to racial injustice in this country.” The Washington Post editorial board said King had “diminished his usefulness to his cause, his country and his people.” In all, 168 newspapers denounced him the next day.

“Henceforth, King would be on the outside, in a picket line, shouting peace chants through the wrought-iron gates,” noted historian Harvard Sitkoff.

A Harris poll conducted after King’s Vietnam speech found that only 25 percent of even African Americans supported him in his antiwar turn — “only 9 percent of the public at large agreed with his objections to the war.”

Despite the intense backlash from elites and the public, King continued to soldier on. In 1967, he gave a Christmas Eve sermon to his congregation at Ebenezer Baptist Church in Atlanta in which he assailed not just American capitalism but the system of global markets that was failing to provide for the world’s poor.

“I started thinking about the fact that right here in our country we spend millions of dollars every day to store surplus food,” he preached. “And I said to myself: ‘I know where we can store that food free of charge — in the wrinkled stomachs of the millions of God’s children in Asia, Africa, Latin America, and even in our own nation, who go to bed hungry at night.’”

During his civil rights campaign, King had also been organizing workers; for example, he campaigned against the Oklahoma right-to-work referendum and warned that increased economic competition between whites and blacks would undermine civil rights — calling instead for a “Grand Alliance” between working-class whites and blacks.

With the Poor People’s Campaign, launched in 1968, King escalated this campaign, aimed at providing good jobs, housing, and a decent standard of living to all Americans. Decades before American protesters took to the streets of New York City and other locales to “occupy” space to protest inequality, King proposed a massive tent encampment in Washington, D.C., to demand action on poverty. Here’s an Associated Press article about the campaign: 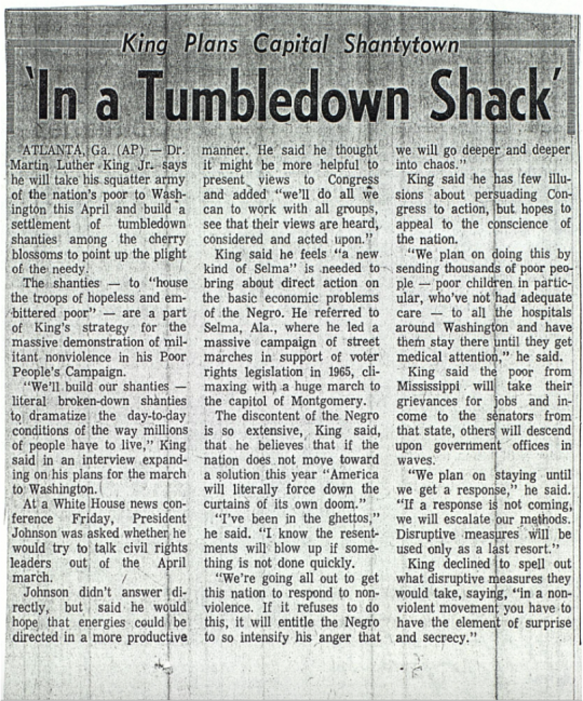 He never saw it come to fruition. He was assassinated that year while organizing striking Memphis sanitation workers.

Southern Christian Leadership Conference president, Ralph Abernathy, and Coretta Scott King followed through with the plan, setting up tents and shacks on the Mall in Washington, D.C. Deemed “Resurrection City,” this encampment lasted a month before the Department of Interior forced it to close down.

King’s approval ratings are much higher decades after his death than they were during his life. By 1987, 76 percent of Americans held a favorable view of the activist leader. But many are taught a simplified version of his life, focusing on only one of the three dimensions that defined him. During the Vietnam speech that turned the establishment against him, King railed against the “the giant triplets of racism, extreme materialism and militarism.”

Zaid Jilani is a journalist who hails from Atlanta, Georgia. He has previously worked as a reporter-blogger for ThinkProgress, United Republic, the Progressive Change Campaign Committee, and Alternet

Zaid graduated from the University of Georgia in 2009 with a Bachelor of Arts in international affairs and received his master’s in public administration from Syracuse University in 2014. | Contact The Author; Zaid Jilani zaid.jilani@ theintercept.com | @ZaidJilani

Reprinted with permission from The Intercept

This piece was reprinted by EmpathyEducates with permission or license. We thank The Intercept and the Author, Zaid Jilani for their kindness, awareness, and for inviting us to look at what we believe as a nation. Might it be time to ponder the harm we do when we romanticize, whitewash, and rewrite our history?