The NYC mayor is drawing a line in the sand when it comes to funding charter schools.

For 12 years it was Mayor Bloomberg, standing at the forefront of a national education reform movement, who overshadowed Bill de Blasio and his progressive ilk. Bloomberg considered New York the “poster child” of free-market education reform as he seized mayoral control of the district, closed nearly 200 “failing schools” and opened about that many charters.

But as de Blasio settles into office, his administration has already dealt major blows to one of Bloomberg’s sacred cows. Late last week, newly appointed schools chancellor Carmen Fariña announced that the Department of Education would redirect $210 million from charter schools and independent nonprofits to fund de Blasio’s pre-kindergarten initiative.

The surprise announcement reflects educational priorities in upheaval. The millions in question had been earmarked by the former administration to help clear space for new and expanding charter schools in the coming five years. Instead, Fariña plans to divert the funds to priorities like de Blasio’s flagship initiative, the pre-kindergarten programs sold largely as a remedy for inequality.

The move epitomizes the shifting public perceptions that propelled de Blasio into office. In his election, voters “were in many ways repudiating the last 12 years of Bloomberg,” says NYU education professor Pedro Noguera. 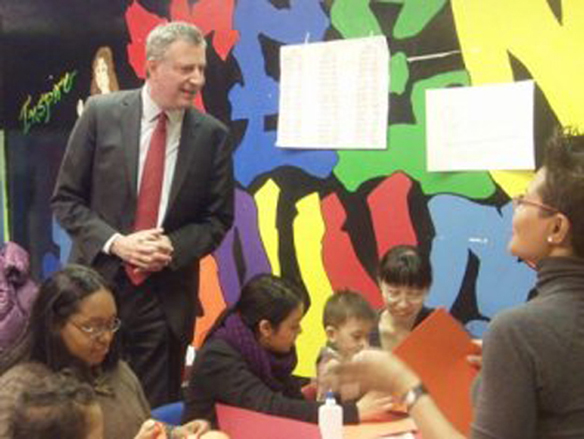 A sharpened focus on inequality from the city’s top brass heralds a sea change in New York education, the third most deeply segregated system in the country. It’s no surprise, then, that de Blasio has targeted the charter sector many see as a manifestation of his well-known “tale of two cities” rhetoric. After private donations, many charters receive

The charter divide becomes most conspicuous in co-locations, the controversial practice of plopping new charters and district schools into the buildings of existing ones. Though some co-locations occur between traditional public schools, it’s co-located charters that spark the most indignation, especially when well-heeled charter networks renovate their half of the building without dropping a penny into district coffers. This is how charters get their slice of the district footprint.

A parting shot from the previous administration has left de Blasio to negotiate a record 42 new co-locations, approved hastily by an appointed panel in the last months of Bloomberg’s term. Though the budget announcement last week signaled de Blasio’s overall mood regarding charters, the traditional public schools slated for co-location are more concerned about Bloomberg’s final proposals, currently under review by the education department.

I.S. 59 in Jamaica, Queens, is a potent example of how unevenly Bloomberg’s reforms impacted schools. The former mayor, who emphasized his desire for education to define his legacy, succeeded in leaving an impression there, of a sort: “They were setting the school up to fail.”

That’s according to PTA president Annette Brown, who says the school was once regarded as the “flagship junior high” in the district, renowned for its music and arts programs.

But population shifts brought on by Bloomberg’s reforms troubled the waters at the school, whose student body is over 90% black. New K-8 campuses, charter and traditional, siphoned off I.S. 59 enrollees, while transfers brought a crop of challenging students into the school. Within a decade, enrollment had dropped by about half. Since 2009, I.S. 59’s share of economically disadvantaged students has risen nearly 40%.

A 2013 Annenberg Institute study of New York public high schools confirms this pattern as typical in the era of school choice. “The choice system,” says NYU’s Noguera, “was still concentrating too many of the most disadvantaged kids in neighborhood schools.”

After I.S. 59’s population dipped, the Bloomberg administration started eyeing the school’s attractive real estate. In 2010, the Panel for Educational Policy, a governing board composed mainly of mayoral appointments, suggested co-locating Eagle Academy, a charter, within the school. The community rallied in opposition, and the PEP relented. But in a rare move, the PEP eventually reversed its decision and the following month approved a temporary co-location, bringing Eagle Academy into the building for two tumultuous years marked by crowded hallways and disputes over shared spaces.

Last year, with Bloomberg’s departure in sight, I.S. 59 finally began to breathe easy. But in the last substantive meeting of Bloomberg’s PEP, the school received a shock: yet again, they’d be moving aside for a charter school: this time, Success Academy.

“Success doesn’t have a good track record,” Annette Brown recalls thinking. She’d heard how the charter network, the largest in the city, had repeatedly come under fire for excluding students with disabilities.

The PEP slapped together obligatory assessments of building space and educational impact, leaving I.S. 59 with little to do but cry foul and rally once more. Projections from the city show I.S. 59’s enrollment falling while Success slowly overtakes its host. “The Department of Education’s intention,” Brown worries, “is to eventually phase out and close down I.S. 59.”

Mayor de Blasio’s promise to halt co-locations aims at making such conflicts a relic of the Bloomberg era, and his recast funding priorities throw future charter growth into doubt.

“We do not believe the money should be devoted to charter expansion,” de Blasio said of the funds Chancellor Fariña proposed shifting to initiatives like pre-K expansion. “We think it should be freed up for other priorities.”

The $210 million being diverted is only part of a charter allotment that has swollen from $32 million in 2002 to over $1 billion last year. (Notably, $210 million is the same amount that the Bloomberg administration added to charter school funding pot in the last year of his term, a surprise upward revision that one city council member at the time called “totally outrageous and unacceptable.”)

Many members of the insurgent progressive caucus in the City Hall share the stance Fariña and de Blasio have taken on charter schools. Council member Daniel Dromm, newly appointed chair of the City Council’s Education Committee, saw in Bloomberg’s charter advocacy “the corporatization of the public school system.” The growth of charter schools, Dromm says, reflected an attempt “to privatize the New York public school system.”

Zakiyah Ansari, an education advocate picked to serve on de Blasio’s transition team, worries about the way charters manifest inequalities. A mother of eight current and former New York public school students, Ansari emphasizes that de Blasio “never said that he was anti-charter. This is about fairness and equity.”

In fact, one of her own sons attends a charter school. She opposes the co-location policies that “created this divide and this divisiveness… which, if we’re really honest, is between parents of color.”

To address that sense of inequity, de Blasio plans to charge the 119 charters housed in public space rent pegged to each charter’s level of outside funding. Even during the campaign, de Blasio’s position was clear: “There is no way in hell that Eva Moskowitz”—CEO of the prolific Success Academy network—“should get free rent.”

His incipient rent plan has drawn equal measures of gratitude and outrage,/a>, with some claiming that charters drain funds from district schools, and charter proponents warning that rent would cripple them.

New York’s charter schools receive public funding (and a healthy flow of cash from hedge funds and foundations) but operate independently of city guidelines on discipline, instruction and staffing. Bloomberg’s decision in the early 2000s to grant charters public space at no cost allowed the sector to proliferate. Nationally, only 13% of charter schools receive facilities gratis.

If de Blasio aims to curtail charter growth, though, he faces limitations. Even with co-locations barred, 31 charters may still open in private space before the city hits a state-imposed charter cap. “The charter sector is quite independent of the New York City Department of Education and City Hall,” says David Bloomfield, professor of education at Brooklyn College and the CUNY Graduate Center. “The sector will continue to grow,” he predicts, pointing to many parties still “interested in starting charters.”

The next battleground has developed around the final 42 Bloomberg-era co-locations, currently under review by Chancellor Fariña. The October 2013 torrent of school placements that dumped Success Academy into I.S. 59 comprised the largest contingent ever green-lighted by the PEP.

Analogous to a laid-off employee yanking the fire alarm on the way out, the PEP’s co-location vote a week before de Blasio’s landslide election incensed many in the public school community. Council member Dromm saw the board’s vote as an attempt by the outgoing coterie “to force their educational policies on the incoming administration.”

Several parent groups and New York City council members have joined the Public Advocate’s lawsuit blocking the unprecedented spate of co-locations. Charter advocates defend the PEP’s approvals, which include 10 Success Academy schools and 15 other charters, arguing that 5,600 students would lose seats if the lawsuit succeeded.

The lawsuit highlights how drastically the October proceedings diverged from the PEP’s typical operation. The panel completed school-level impact evaluations hastily, failed to provide requisite Spanish translations, and gave little time for community input. They even gave the nod to schools state authorities had yet to approve—schools that were functionally nonexistent.

According to the lawsuit, the PEP’s “boilerplate, pro forma” documentation also falls short on space considerations. Ansari, who helped organize protests at the PEP meetings, paints a picture of schools losing “art rooms and dance studios and science labs,” of “children with special needs learning in the hallways and closets.” Over 40% of the co-locations would push targeted schools over their maximum utilization, the lawsuit claims.

“No one from the community wants these charter schools here,” says Queens City Council Member Ruben Wills of the co-locations, some of which target schools in his district.

As officials deliberate, I.S. 59 hopes for a reprieve from the coming co-location, and a reversal of their torrid relationship with the education department. In a welcome change from the previous administration’s imperious approach, Chancellor Fariña has offered to meet with school leaders and discuss the co-location.

As the I.S. 59 school community can attest, Bloomberg indelibly transformed the landscape of education in the city. De Blasio promises significant advances, but his earliest accomplishment may be in changing the conversation about education from one of failure to one of fairness.

“New York City seems to be the bellwether for this type of change,” says education professor David Bloomfield of how the city’s schools policy has evolved. “We were early into the reform movement and we may be early out.” The first month of de Blasio’s term suggests just how far the waters of free-market reform may recede in New York—and throughout the country.

“This is not just about New York City,” insists Ansari of the shifting winds in education reform. “Everywhere you turn it’s happening.”

Owen Davis is a New York-based writer and former intern at The Nation magazine. He writes curriculum for the alternative children’s magazine IndyKids. Davis blogs here and tweets @of_davis.