The Faces and the Money Behind the Post-Katrina Education Reforms 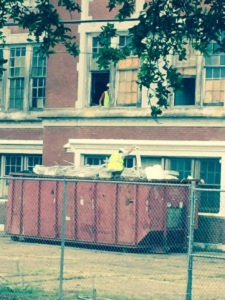 The Recovery School District recently announced that Bricolage Academy, a charter school that currently has a kindergarten and first grade with 75 students in each grade, will be moving into the John McDonogh building on Esplanade Avenue. According to its charter application, Bricolage will add a grade each year, so that by 2021 it will be a K-8 elementary school.

The decision came after and despite dogged attempts by the John McDonogh High School Steering Committee to keep the historic campus open and return it the Orleans Parish School Board to operate as John McDonogh High School. The organization tried working within the system, attending BESE meetings, developing strategies and proposals that outlined a vision for the campus. When all else failed, they supported a lawsuit to stop the Recovery School District (RSD), the state Board of Elementary and Secondary Education (BESE) and the state department of education from selecting a new charter operator for the building. And while they had some early success with temporary restraining orders, the latest decision to move Bricolage into the Esplanade Avenue building has effectively spelled the end of John McDonogh High School.

To be sure, national and local power players are behind the John McDonogh flim-flam and the larger school “reforms” in New Orleans, especially as it relates to funding. These players sit in positions of power, and their connections to business and political entities play key roles. Major national players include the Walton family; Eli and Edythe Broad; Bill and Melinda Gates; Michael Bloomberg and his family; the Doris and Donald Fisher family; Laura and John Arnold; Teach for America and The New Teacher Project.

National foundations have channeled funds through a relatively small number of local elites who in turn have granted out tens of millions to specific political and economic projects serving interests of particular parties, harming others,” wrote Darwin Bonds Graham in The Review of Black Political Economy (2011, volume 38, issue 4).

“Several regionally-based foundations have also received and distributed significant amounts of grant money intended for long-term recovery and planning. They have served as regional brokers or gatekeepers of major dollars available to nonprofits,” explained Bonds Graham. Local players include the exclusive Rex krewe (and its non-profit foundation Pro Bono Publico), the Reily family; the Greater New Orleans Foundation; former and current BESE and OPSB board members and their family members and affiliations; Tulane University; Baton Rouge businessman Lane Grigsby and his company, Cajun Industries, LLC. Many of these local and national players have funded campaigns in the Orleans Parish School Board (OPSB) and BESE elections. In addition to individual donations, several of these players funnel most of their school board election contributions through Improve Our Schools, Alliance for Better Classrooms (ABC), Louisiana Federation for Children PAC, Stand for Children and Keep New Orleans Moving Forward. To understand who the BESE and many of the OPSB members answer to, we must look at these business.

Elizabeth K. Jeffers is an educator from New Orleans, and she has served as a researcher for the John McDonogh Steering Committee.

We invite you to read more of Elizabeth K. Jeffers reporting on the subject. Please peruse Walton Family Foundation, Eli & Edythe Broad,, Bill and Melinda Gates., Michael Bloomberg and Family and….Also, for an in-depth study please see The Tribune’s Public Education The Myths and Lies of The New Orleans Transformation.

This piece was reprinted by EmpathyEducates with permission or license. We thank the Author Elizabeth K. Jeffers for a glimpse into what has become public education. We also wish to extend our gratitude to The New Orleans Tribune for their kindness and enduring publication.