Zero-Tolerance Strikes Again: Holding Up Three Fingers in a Photo Got this 15-Year-Old Suspended

Zero-Tolerance Strikes Again: Holding Up Three Fingers in a Photo Got this 15-Year-Old Suspended

By Sarah Fuss | Originally Published at

Dontadrian Bruce is the kind of kid the U.S. Departments of Education and Justice might have had in mind when they released the new school disciplinary guidelines in January. The new federal approach urges schools to move away from harsh policies that remove kids from the learning environment.

After 21 days of suspension, Bruce was recently allowed back to Olive Branch High School in Olive Branch, Miss. Bruce had been accused of using a gang sign in a picture taken by his biology teacher after the student had finished building a DNA model out of Legos. In the photo the African American boy holds up three fingers of one hand, which he says was meant to indicate the number on his football jersey.

It didn’t matter that Bruce earns As and Bs. Didn’t matter that he said he had no knowledge that the gesture he’d made was a sign used by a gang known as Vice Lords. Didn’t matter that he’d never been in trouble at school before. Or that his football coach could have testified that the boy spent too much time practicing to be involved in gang activity. The disciplinary hearing officer sentenced Bruce to “indefinite suspension with a recommendation of expulsion.”

Bruce’s readmittance to school came only after community outcry. Bruce’s parents involved the ACLU and the NAACP. The story was featured on local ABC news and went viral. And on a newly created Facebook page, people posed in photos with three fingers held up in solidarity. One such picture (below) taken at Olive Branch High School led to Bruce’s brother being suspended as well.

Though Bruce and his brother are back in school, the civil rights groups continue to work with Bruce’s family, because returning to class is not always the end of the story for students in these situations. Jennifer Riley-Collins, executive director of the ACLU of Mississippi, says, “If a child is not in the learning environment, then their grades are impacted because those are unexcused absences, and often students aren’t given an opportunity to make that work back up.” As a result, students may not be able to advance to the next grade or graduate on time. And if suspensions and expulsions aren’t expunged from a student’s academic record, they can negatively affect admission to higher learning.

According to NBC News, the Olive Branch High School handbook says using gang signs at school is grounds for disciplinary action, but this is not a threat white students are as likely to face. Bruce’s stepfather, Marcus Guy, told NBC, “I was born and raised here, graduated from Olive Branch, and I’m telling you: They would have done nothing [if Bruce had been white].”

In 2013 the ACLU, the NAACP, and other groups issued a report, “Handcuffs on Success: The Extreme School Discipline Crisis in Mississippi Public Schools.” 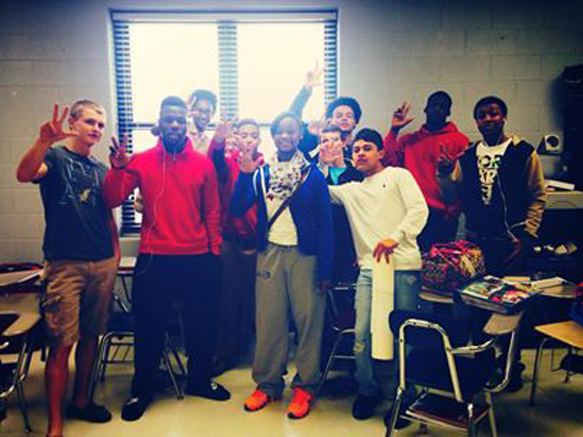 More than 100 school districts were studied, and “for every one white student who is given an out-of-school suspension, three black students are suspended, even though black students comprise just half of the student population.” National statistics are not much better, with African American students making up 46 percent of kids who are suspended from school multiple times, and 39 percent of students expelled—although they make up only 18 percent of students in the 72,000 schools sampled.

Zero-tolerance policies came into favor in the 1990s, when school shootings were on the rise, but now they’re seen as exacerbating class and race divides. With 80 percent of men in prison without a high school diploma, education seems to be exactly what at-risk students need. The new government guidelines focus on reducing disciplinary tactics that are racially discriminatory and keep kids out of class. As a substitute whenever possible, they recommend “restorative justice” that empowers students to lead their own conflict resolution.

In recent years Mississippi school districts have been responsible for several high-profile examples of zero-tolerance punishments, including a five-year-old who was sent home in a police car because his shoes were not the right color and an honor roll student who was expelled after administrators seized his phone and claimed they saw pictures of his gang activity.

In the “Handcuffs on Success” report, the DeSoto school district where Olive Branch High School is located stood out for the harshness of its disciplinary actions. Twelve of every 1,000 students in attendance in that district were referred to juvenile detention centers by their schools.

When the punishment outweighs the crime, the punishment becomes the center of attention. Whether or not Bruce knew he was using a gang sign is now beside the point. “We would recommend that disciplinary referrals that take a child out of school be limited to serious school-based infractions,” Riley-Collins says. “And we would ask that students not be excluded from school for more than five days in any given school year and only after a formal hearing, meaning that the student has a chance to be heard through strong due process protections. We think that school policies need to be reviewed and sometimes revised. We need to make sure that students are not excluded from the school system and pushed into the justice system for childlike behavior.”

This article was created as part of the social action campaign for the documentary TEACH, produced by TakePart’s parent company, Participant Media, in partnership with Bill and Melinda Gates.