One Term Rahm: Talking Back to the Times about Chicago School Closings

One Term Rahm: Talking Back to the Times about Chicago School Closings

Chicago Says, 'One Term Rahm'
What happened to Rahm?
Talking Back to the Times about Chicago School Closings

By Maria Moser | Originally Published at Medium. Synapse. March 4, 2015
Today’s New York Times tries its hand at explaining why on earth something as silly as neighborhood public schools could bedevil Rahm Emanuel right out of his incumbent throne as Mayor of Chicago. My home is on Chicago’s South Side, on a street full of cops and firefighters. People say they’re “new to the neighborhood” if they’ve been here less than 25 years. With a decade under my belt in this city, I’m a relative newcomer. But traveling often for work, and seeing the gap between national coverage and reality on the ground, I’d like to try to answer a question that’s been posed often as of late: What happened to Rahm?

It’s not rocket science: He systematically attacked nearly every city service through a neoliberal privatization plan, and people are, simply put worse off than they were four years ago. As a friend put it, “Rahm’s not so much the mayor as the guy auctioning off what’s left of our public goods.” And public goods have a disproportionate value to middle class and poor people in our city. We have taken notice as these things have happened, because they affect our lives in harmful ways. A sampling, if you’re interested:

These are not abstract policy decisions. If you live in Chicago, your library is open less. They have fewer librarians. There are fewer lifeguards on our beaches in the summer. You spent hours on the phone trying to activate your ventra card only to be disconnected. These are petty and mean ways to close a budget gap in the City of Big Shoulders.

AND THEN THERE ARE THE SCHOOL CLOSINGS.

The New York Times article cited a few statistics while basically echoing Rahm’s talking points about the devastating wave of school closings he wrought on our neighborhoods. For comparison, I’ve linked to the excellent Chicago journalists and researchers who have poked holes in each of them:

Rahm: We have to make tough decisions because of our fiscal crisis.

NYT: For the mayor, this was one step toward bringing better education to students trapped in failing schools amid a fiscal crisis.

Chicago: In reality, CPS used accounting tricks throughout the entire process to hide the true (financial) cost of closing schools and overstate the benefits. These tricks have not been subtle, and WBEZ and Catalyst Chicago did an excellent job chronicling them. But it just takes too long to explain, and “BUDGET SHORTFALL THEREFORE SCHOOL CLOSINGS” is a convenient narrative, even when proven false. In fact CPS routinely releases estimates of huge budget deficits and still closes the fiscal year with a surplus: from 2005–2012, their budgets projected losses of $1.027 billion, but actually achieved a surplus of .92 billion — a difference of 1.9 billion. As good teachers and students know, doing your homework makes the difference.

If there are financial benefits, they are going to be long term and relatively modest, offset by the cost of doubling down on risky interest-rate swaps. Meanwhile, the effects of the closings have been wrenching. The Mayor talks about accountability, and we know he means numbers, when he’s talking about teachers and students. But his own numbers are essentially placeholders, meant to say, “We know what’s best for you. Now shut up and let us do it.”

Rahm: These schools were “underutilized” due to declining enrollment.

NYT: The population in Chicago had shrunk over time, some students had chosen alternatives like charter schools, and Overton was only half full.

Chicago: Rahm and Co. used MANY lies on this one!

Overall enrollment in Chicago Public Schools has declined 6 percent in the last 14 years, a loss of 28,289 students. In that time, CPS has opened more than 120 new schools, many of them charters, shifting enrollment patterns. The percentage of students attending traditional schools has dropped 17 percent, while the percentage in charter schools (most housed in non-CPS buildings) has increased. School officials say they have not analyzed whether opening new schools has exacerbated the number of empty desks in Chicago. The district has said it wants to open at least 17 more new schools this fall.

Rahm: We had to do this to improve student achievement.

NYT: A study by the University of Chicago Consortium on Chicago School Research found that 93 percent of the nearly 11,000 displaced elementary students wound up in schools with better ratings.

Chicago: “Beware the half-truth, you may get the wrong half…”

According to the same research, only 21% of displaced students ended in Level 1 schools (the city’s highest tier), and CSSR research on closings has shown that only students in a substantially-higher performing school are likely to see improvement. More than 30% of students remained in Level 3 schools (the lowest rating), regardless of whether their numeric score was a point or two higher than the previous. In fact, the biggest takeaway from the CCSR’s 2009 study of more than 40 CPS school closings over the previous decade was that closing schools had little impact on achievement.

Rahm: Blame the parents! “As I always say, the most important door a child walks through for their education is the front door of the home. If that home is not right, nothing else in the classroom can supplement it.”

NYT: In these neighborhoods, parents speak of deep ties to their old schools and frustration at having to move their children, sometimes to schools farther away or across gang boundaries.

Chicago: Again, let’s turn to Rahm’s favorite source of support, the CSSR report. It observes that maybe, just maybe, there could be more to the quality of a school than the numbers on a standardized test:

For many families academic quality meant something different than a schools’ performance policy rating. The way that many parents defined academic quality was different than the official markers of quality represented by the district’s performance policy rating system. For example, many families defined academic quality as having after-school programs, certain curricula and courses, small class sizes, positive and welcoming school environments, and/or one-on-one attention from teachers in classes.

Of course, what do they know? Actually, apparently the exact same thing that the Consortium on Chicago School Research discovered: that test scores aren’t everything. 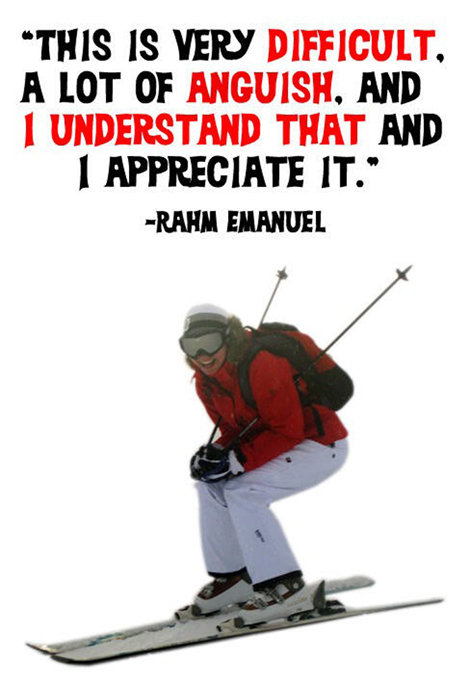 An Anguished Mayor
Rahm: This is not about race.

NYT: And many of the neighborhoods that faced schools closings were in predominantly black or Latino areas.

Rahm: I definitely, totally, care about the people of Chicago.

NYT: Of the closings, Mr. Emanuel said the choice had been vexing but necessary. “Could I have done things different?” Mr. Emanuel asked. “There’s no doubt you could, and your strengths are your weaknesses. But those were structural things. You needed leadership. You needed fortitude.”

Chicago: It was especially touching how the mayor decided to let this news go public while on a ski trip with his family.

Not only could you have done things differently, Rahm, you could have asked the authentic leader’s question. The one that escaped you then and haunts you now: Is suddenly closing fifty neighborhood schools the right thing to do, and how will it affect the people of Chicago?

In short, at some point the expansive gap between press conference sound bites and reality becomes too glaring to ignore, even for the democracy-squeamish denizens of our beautiful, corrupt home on a frozen lake. Repeating lies and half-truths doesn’t make them true. The people of Chicago and their lived experiences are an inconvenient truth, and even if the rest of the press forgets the little indignities and lies, we haven’t. See you in April, Mr. Mayor.

Maria Moser is a Chicago resident. | Follow her at @mosermadness

This piece was reprinted by EmpathyEducates with permission or license. We thank the Author, Maria Moser for her kindness, observations, research and what we believe is a vital reflection.