The Politics of Pre-K: How A Program Known to Help Poor Mothers Could Doom Your Candidacy

The Politics of Pre-K: How A Program Known to Help Poor Mothers Could Doom Your Candidacy

When the emphasis is kept on how it’s good for business, early-childhood education is popular. Just don’t call it childcare.

In Pennsylvania’s gubernatorial race, education has emerged as one of the most heated issues. A Quinnipiac University poll released this month found education ranked as the most important issue for voters, after jobs and the economy. Despite contentious politics surrounding reform of public education from kindergarten through twelfth grade, Republican incumbent Tom Corbett and Democratic challenger Tom Wolf have discovered that plugging expansion of pre-kindergarten programs wins them political points without treading into treacherous waters. That is, as long as they don’t mention the mothers who will inevitably benefit, too.

The governor’s record is haunted by his 2011 budget, from which he cut nearly $900 million in public education funds—a decrease of more than 10 percent. The severe cuts have garnered national attention, particularly for Philadelphia—the state’s largest school district—which wrestled with a $304 million cut this past school year. Last year, a GOP research firm conducted a secret poll and found 69 percent of Pennsylvanians felt the state’s public education system is on the “wrong track;” 64 percent blamed Corbett.

[Corbett, in turn, is trying to blame his predecessor, Democrat Ed Rendell, who infused temporary economic stimulus money into the education budget. But many voters don’t have patience for these defenses: They understand that class sizes have increased, that art, music and advanced placement offerings have been reduced, and that thousands of teachers—not to mention many counselors, nurses, librarians, and administrative staffers—have lost their jobs on Corbett’s watch.

They understand that class sizes have increased, that art, music and advanced placement offerings have been reduced

Given education’s importance to Pennsylvania voters, the Corbett campaign has released ads lauding the governor for having “increased spending in the education department by $1.5 billion.” But this increase really came about because Pennsylvania is now paying more toward employee retirement plans, an obligation set by the state legislature.

While education debates typically center on polarizing issues such as charter schools, standardized tests and teacher unions, both candidates have found modest political respite by promoting a seemingly innocuous preschool agenda. Each campaign has created TV ads and sent direct mailings to voters about its candidate’s commitment to early-childhood education. Wolf’s platform includes the creation of a universal program, and Corbett has advertised the $10 million budget increase he oversaw to expand pre-K access.

None of this would have been possible without the launch of the Pre-K for PA campaign, a well-organized nonpartisan effort designed to educate the Pennsylvania public, policymakers, and those running for public office about the benefits of early-childhood education. According to Donna Cooper, executive director of Public Citizens for Children and Youth, none of the candidates running in the gubernatorial primaries were taking up this issue at all until the Pre-K for PA campaign started to organize at campaign stops and hold their own public events in areas of high voter concentration.

“By the time we reached the Democratic primaries,

[the candidates] all started falling all over each other in support of pre-K,” said Cooper. “And then Corbett did it, too, because it was seen as a safe issue.”

Although President Barack Obama has called for the creation of a universal pre-K program, the influx of business groups that support early childhood education on the grounds of workforce preparation has turned it into a relatively bipartisan aim. Some of the most highly regarded models of quality preschool in the nation, in fact, are in two red states: Oklahoma and Alabama. In April, the president and CEO of the Business Council of Alabama came to Philadelphia to discuss the ways in which Alabama’s business community worked to develop his state’s pre-K system.

Wolf has insisted that pre-K is “a foundation for economic development” that would create jobs and attract entrepreneurs. Corbett has argued that pre-K programs are “the best investment going,” because they save money down the line. 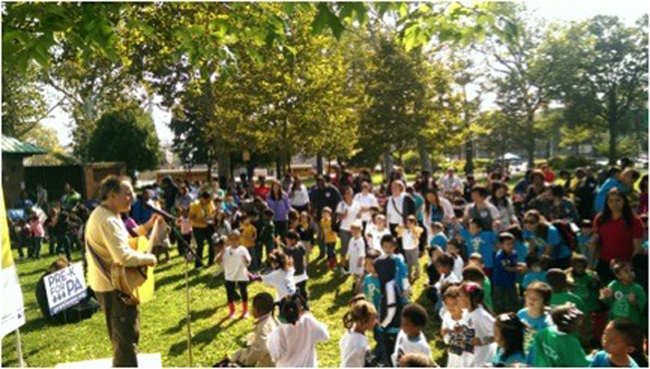 Photo via Jon Herrmann of Pre-K for PA | Three hundred preschoolers and their parents gathered in Philadelphia on September 16, 2014, to rally for early-childhood education. Not visible in photo is Philadelphia schools Superintendent William R. Hite, Jr., who keynoted the rally.

Pre-K for PA has also employed economic rhetoric. In an open letter sent to both candidates in May, the campaign stressed:

Pre-K for PA has the support of many business leaders throughout the commonwealth. Among those leaders we are proud that [Comcast Executive Vice President] David L. Cohen penned an op-ed published last month in The Philadelphia Inquirer that stated: “Early-childhood education is not just a ‘nice to have’—it is an educational, moral and societal imperative essential to building the workforce of the future.”

But advocates know that early childhood education would impact far more than just our future labor market. While studies have documented the role pre-K can play in aiding the intellectual development of children, research has also shown how a pre-K expansion would significantly benefit low-income families, particularly poor women.

Mothers who have regular childcare are far more likely to stay employed. Moreover, a continuous work history correlates with better pay and benefits, but women often have to interrupt their careers because of a lack of steady childcare. An expansion of high quality pre-K would mean women would not only be more likely to keep their jobs, but also advance their careers.

Yet the candidates generally avoid these talking points. Even Wolf, with a 24-point lead, is quick to tell audiences that pre-K is “not just about social welfare.” In policy papers, leaders of the Pre-K for PA campaign have acknowledged that early childhood education is a boon to needier families, but they, too, seek to frame their public messaging to encompass all families, not just those that are low-income or headed by single parents.

“We don’t want to create a class conflict around this,” said Cooper, who points out that it’s a “broad coalition” that goes to the polls. Citing the pre-K model of New York City mayor Bill de Blasio, which aimed to make pre-K available to everyone, Cooper said that universal pre-K “makes every family a stakeholder.”

No doubt, given the Keystone State’s education budget crisis, enacting a major pre-K plan would be politically challenging. One could reasonably argue that ignoring mothers on the campaign trail, in a state with a large conservative contingent, is perhaps the only way to build critical support for early childhood education.

But this shouldn’t be taken at face value; the terms in which pre-K is framed, and the justifications provided for it, will inevitably affect the substance of the policy. Early childhood education has garnered tremendous political momentum, but it may have come at a price.

If we are expecting women to be economically self-sufficient, then we have to have systems and institutions that support the demands women have on themselves now.

“I wish candidates would make that connection between women’s need to work and families’ need to have access to quality early childhood education, because it’s critical,” said Tam St. Claire, the president of the Bucks County Women’s Advocacy Coalition, a Pennsylvania coalition of non-profits and individuals that serve women and girls. “If we are expecting women to be economically self-sufficient, then we have to have systems and institutions that support the demands women have on themselves now.”

Debasri Ghosh, the director of education and communications at Women’s Way, a Philadelphia-based women’s and girls’ advocacy organization, points out that not only is pre-K important for children but “it’s also an incredibly stabilizing force for women and their families.” And a lack of accessible and affordable childcare, Ghosh explains, “can perpetuate the existing wage gap between men and women.”

Looking beyond Corbett and Wolf, the Pre-K for PA campaign is working to move big political donors, as well as candidates for the Senate and House of Representatives in Pennsylvania and nearby states. And a new survey reveals that 64 percent of voters support increased funding for pre-K programs in Pennsylvania. The stakes are high: In a state where only 18 percent of three- and four-year-olds currently have access to high quality early-childhood education—and where 13.6 percent of single mothers with minor children are unemployed—the campaign’s outcome could dramatically impact not only those in Pennsylvania, but children, families and women across the country.

Rachel M. Cohen is a writing fellow at The American Prospect. Her work has appeared in the Washington Monthly, Dissent, Next City and The Forward. | Articles By Rachel M. Cohen

This piece was reprinted by EmpathyEducates with the kind permission of the American Prospect/em>. We thank the publication for its enduring profundity and Rachel Cohen for her excellent examination.