Love Our Children — Do Not Elect The Hate Crime Perpetrators 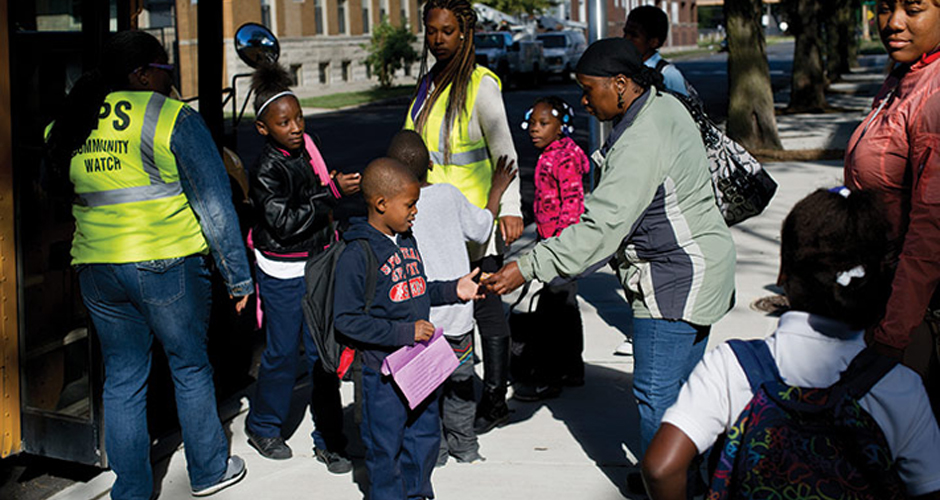 In this photo from the fall of 2013, children crowd onto a school bus from the shuttered Overton Elementary to Mollison. Many parents didn’t send their childen to the designated new school. [Photo by Marc Monaghan]

Grandmom Irene Robinson pleas, before you cast your ballot remember Mayor Rahm Emanuel Stole Our Children’s Lives and Their Future.

Please read this real quick statement. I share the story of the wolf that came into our community. He blew up our neighborhood schools. He left our children behind. Yes, our Mayor is rich and powerful and that is fine. But what is not fine is that he does not respect our children. He does not invest in their future, nor does he support their education let alone our community.

Oh, he gets the job done, but at the expense of our young ones. Mayor Rahm Emanuel has a record, a record of destruction. Look at the lives of our children of color. The Mayor has broken into their community, our community, and now he wants to take out last neighborhood high school from us… and our children. Where is the justice? Where is the concern for our children?

Now, with the impending election Rahm Emanuel is on the move to select a Council of more Mayor-friendly aldermanic faces. He, in collaboration with a $1.35 million-and-counting superPAC 'Chicago Forward' created a questionnaire and sent it out to 53 aldermanic candidates.

I can tell you for sure, closing schools is a hate crime. The process, the policies, devastate our community, and destabilize our neighborhood. We, the parents and grandparents, must fight back against the harm that has been done. We have no support from our aldermen; they have been literally bought off by our mayor. This is not a democracy when the peoples’ needs are neglected, their wants and desires rejected, and when the voters’ will is ignored by those in office. We have to ask the question; has Rahm Emmanuel, and the wealthy who support him, secured a safe station? A University of Illinois at Chicago study suggests that maybe…Have you read Rahm Emanuel’s Rubber Stamp City Council? Please let me share just a snippet….”38 of the [50] aldermen voted with Mayor Emanuel 90% – 100% of the time over the last three and a half years. Six other aldermen supported him more than 80% of the time and only six in opposition limited their support of him from 40%- 79% on these critical votes with divided roll call votes. “

Now, with the impending election Rahm Emanuel is on the move to select a Council of more Mayor-friendly aldermanic faces. He, in collaboration with a $1.35 million-and-counting superPAC “Chicago Forward” created a questionnaire and sent it out to 53 aldermanic candidates. The intent is to determine support for the Mayor’s agenda…“high-quality school choices for families that include neighborhood, charter, IB, STEM, magnet and selective enrollment schools.

Even the stated agenda is as skewed as this election! What is true? What did Rahm do? He closed 54 neighborhood schools hurting our children and leaving them behind.

And what about support for an elected School Board? That is not the Mayor’s agenda. No, it would seem, the powerful the entitled are not there for the people. They were the wolves at the door. Now, they have come into the community and stolen our children’s lives and their future. 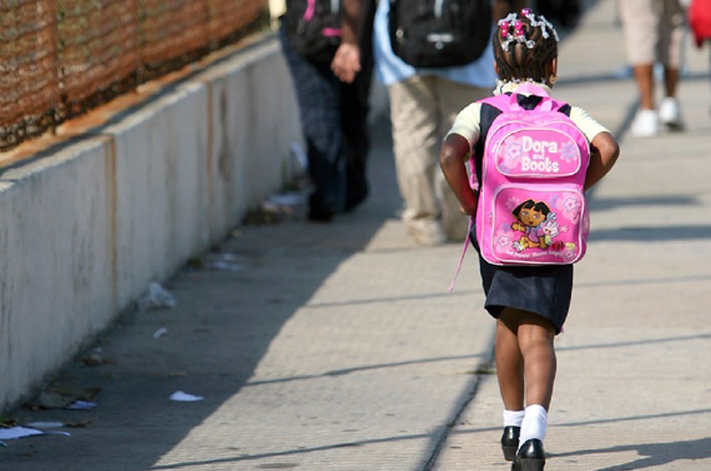 I believe our Mayor is very much guilty — This is a hate crime… and it is not the only one perpetuated in our neighborhood. Some are more flagrant. Consider what occurs when we try to save our schools. You may have heard of Dyett High School.

It is the only neighborhood open enrollment High School remaining in our community. Perhaps it is not remaining as much as barely sustaining itself. Today, only twelve graduating seniors are left to attend classes — that is if you can call taking courses — such as art, gym and music online. Dyett’s staff consists of three teachers and one principal. You see Dyett was slated to be phased-out four [4] years ago. And this is the last year remaining.

Today, only twelve graduating seniors are left to attend classes — that is if you can call taking courses -- such as art, gym and music online. Dyett's staff consists of three teachers and one principal. You see Dyett was slated to be phased-out four (4) years ago. And this is the last year remaining.

In 2012, in a Chicago Public Schools report filled with “Not Enough Data” statements, it was determined that Dyett was a low performing schools. Granted the school struggled, mostly for attention. It did so from the beginning. It would seem that was the plan. Instead of the 3 Rs Dyett was given the 3D agenda. Destabilization | Disinvestment | Disenfranchisement.

Yes, as documented in a University of Illinois at Chicago study, “Dyett was set up for failure from the beginning. In 1999, CPS converted Dyett from a middle to high school but provided no high school resources.” The incoming freshmen entered the doors of the school with hopes and dreams — These were quickly shattered. A library with only seven books cannot sustain a vision. Even the most eager mind needs tools to seek her mission. Unequipped science labs and no college preparatory classes do not serve our children. Yet that seems to have been the plan. Dyett High School was expected to meet district performance standards without resources.

Only the community ‘s investment in the children has kept Dyett standing. That is unless you believe the words of handpicked henchman, City Council Alderman Will Burn’s. Today, this Alderman takes credit for “saving” Dyett from her destiny — closing. Indeed, the story is quite different. I know because I was there. I was one of the eleven parents, grandparents and community members arrested at the Mayor’s office. We insisted that Dyett High School be kept open. It was the first time I’ve ever been to jail. Myself, and a 73 year-old, were amongst the eleven. We went to Chicago Public Schools, neighborhood schools. We walked to school. We did not fear for our future. That’s what we want for our children!

Today, at least for our Bronzeville babies, everything has changed. Neighborhood schools are closed and sold to the highest bidder. Our children, often in frightful weather, are forced to travel long distances to attend [un]welcoming schools. These learning centers are not only overcrowding, they too are often on the chopping-block agenda. Can our Mayor Rahm Emanuel be more cruel? “Repurposing our schools.

Only the community 's investment in the children has kept Dyett standing. That is unless you believe the words of handpicked henchman, City Council Alderman Will Burn's. Today, this Alderman takes credit for 'saving' Dyett from her destiny — closing.

Our mayor is very cold hearted and doesn’t care about the children of color or their education or their future. He has disrespected the history and the legacy of great Black Civil Rights leaders. Have I told you about Anthony Overton or the elementary school named in his honor? Well, that school is closed, It was then sold. The sign bearing the Overton name was dismantled. Where is the justice? Where is the shame? I see the pain!

The Mayor attacks our children from preschool to 12th grade. He is a big man, big everywhere but on campus. Mayor Rahm Emanuel, if you ask any Dyett High School student, anyone in the community, they will tell you, you stole our historical perspective. You stole our significant schools. You tore the heart out of the community!!! If we have anything to say, you will not be re-elected. You got the job done closing 49 schools and destroying thousands and thousand of our children’s lives.

But we pledge that will not stand.

My fellow citizens, it is up to us, we the people to say who or what will stand!!! Let us take back our community, our children’s dignity, their pride, their lives and their future. Please consider all that I share. Get out and vote for someone who is truly a big hearted man! [That is not Rahm.] Please never forget, Closing schools is a hate crime and our current Mayor Rahm Emanuel is guilty of this crime. Let us elect anyone but Rahm! 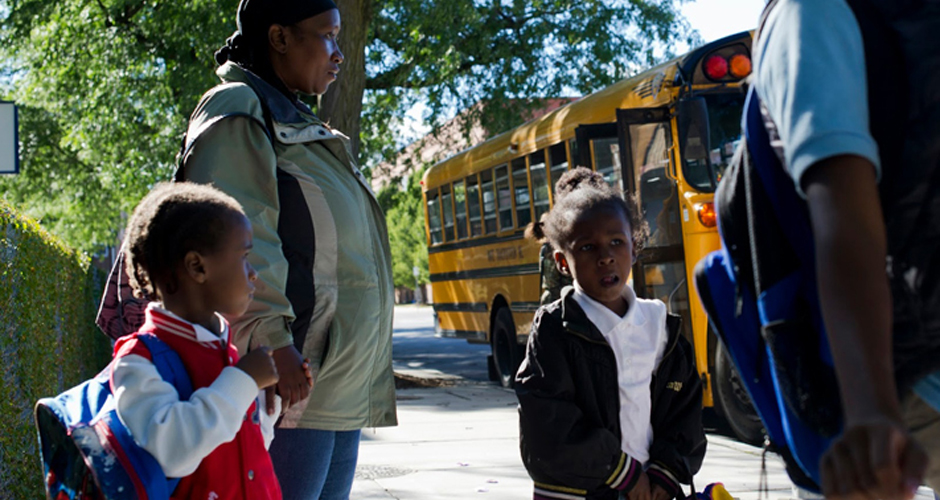 This piece was reprinted by EmpathyEducates with permission or license. We thank the Author, Irene Robinson for her kindness, enduring vision, and all that she does to preserve the lives of our children.